What Is Kim Kardashian’s Reputation Worth? Ask The Gap 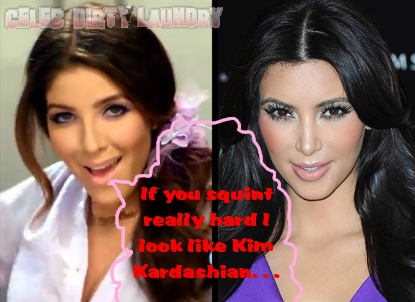 The law will decide both the value of Kim Kardashian‘s reputation and the value of her endorsement as she battles The Gap over their use of a Kardashian look-alike. It seems that Kim’s lawyers are claiming that The Gap used Melissa Molinara in a TV commercial for Old Navy hoping people would think that it was Kim. Melissa is a model and a singer who really does resemble Kim, albeit a better looking version, and Kim’s lawyers are looking for a $20 million settlement.

The sickest part of the case is that Miami Dolphins running back Reggie Bush, one of Kardashian’s ex-boyfriends, started dating Molinara AFTER the commercial came out! The Gap wants Bush’s testimony – for reasons that are unclear – and he will likely be a witness at any trial.

The Gap is cool with the whole deal since their insurance company has agreed to cover any loses they sustain as result of the lawsuit. Kim’s lawyers argue that Kim is owed money for the unapproved use use of her image (that would be the value of her endorsement) and more seriously, that The Gap created confusion in the marketplace thereby lessening the value of Kim’s reputation.

The Gap has hired high-powered Hollywood lawyer Louis Petrich to fight Kim – and his basic argument is that Kim’s reputation is so lousy, and has been damaged by so many things that she has done, that it is impossible that The Gap made it any worse. Furthermore, Kim’s claim that the clothing retailer Bebe decided to drop its Kardashian clothing line as a result of the Molinara commercial looks weak. In fact Bebe dropped the Kardashian line about the same time that The New York Times published a review that described Kardashian’s Manhattan pop-up store as a “fashion desert.”

The Hollywood Reporter carried the Hollywood, Esq article explaining the case. To read all the details of the case click here.