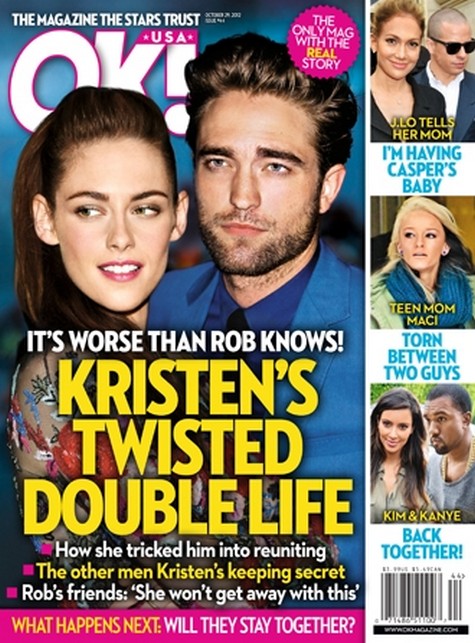 The current issue of OK! Magazine features the bombshell  cover story “Kristen Stewart’s Double Life!”  Twilight Shocker!  The sweet and innocent Ms. Kristen Stewart has been leading a double life.  What’s going on in her second life you ask?  Well, she is reported to be secretly dating several different guys behind Rob’s back.  There’s also a little trickery up the witch’s sleeve as she was able swindle Rob back.  But how did she do it?  A little faked pregnancy sprinkled with a fake suicide attempt?  Who knows, but you can read the story in this week’s issue of OK! Magazine.

Also in this week’s issue find out about one of your fave Teen Mom’s, Maci Bookout.  The poor girl is torn between two different guys.  Is it Ryan and Kyle or is it Kyle and someone new?  Find out if there’s a mystery guy or if she just can’t decide between her hot baby daddy Ryan and the super sweet gentleman Kyle.

Kim and Yeezy back together!  The most popular Kardashian, Kim is said to be back with her love Kanye West and they are planning to cohabitate.  Sources are reporting that the lovers have been love nest shopping recently.  Find out which houses they are deciding on and where.

Jennifer Lopez and Casper Smart are looking to expand their brood.  The mother of twins, J.Lo is so in love with her new man Casper Smart that she has promised to give him a child.  Does she love him enough to distort her killer bod for 9 months or will she be using a surrogate this time.  In fact she has confessed to her mother that she is already expecting baby number 3 or 3 and 4.

To find out more about all these stories and more you can read about them in this weeks issue of OK! Magazine on stands now.