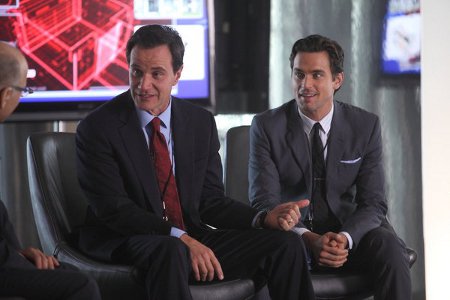 CDL had the chance to watch/review the mid-season finale of White Collar, which airs September 18th at 9/8c, and we’re just going to say right now that you’re definitely not going to want to miss this episode — especially if you’re a fan of the show. The episode, which is titled “Vested Interest,” begins with Peter and Neal at an FBI conference. While there, the dynamic duo are given the chance to speak — to highlight their successful stint as crime-fighting partners. Everything seems to be going well until they receive word that there’s been an all-system security breach. Not good, folks. Not good.

Eventually, Neal (Matt Bomer) and Peter (Tim DeKay) discover that the thief might be after some high tech gadgetry that is being displayed at the conference, and they suspect an FBI agent is the culprit. But who might it be? When Peter, Neal, and their team decide to pull some smooth FBI moves to try and weed out the rat, they’re in for a big surprise when they discover that the thief has a very different game plan in mind, and he/she has his/her eyes set on a prize much more valuable to the FBI than some fancy gadgetry.

As all that run-of-the-mill potential thievery is going down, Neal continues to deal with Sam — and that subplot develops in interesting, exciting, and jawdropping ways. This finale episode was pretty good and it contains a big reveal that you must see for yourself. No, really, if you want to know you’re going to have to watch the episode. Because I was sworn to secrecy. And no bribing — because I’m bad enough at keeping secrets as it is.

Watch the episode, which airs Tuesday, September 18th at 9/8c. “Vested Interest” features guest stars Treat Williams, Scott Evans, Ned Eisenberg, Jason Pendergraft, and Pawel Szajda. Let us know what you think about the finale after you watch the episode.