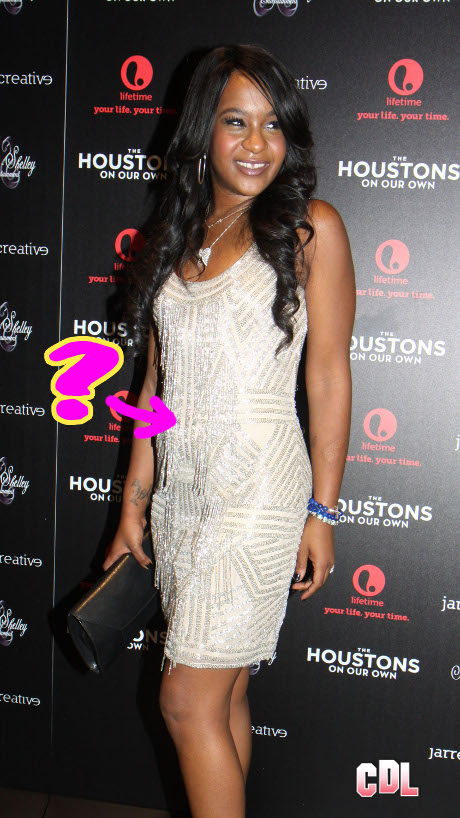 Bobbi Kristina Brown is currently promoting her new Lifetime reality show, The Houstons: On Our Own, and according to a recent promo the daughter of late Whitney Houston is engaged to Nick Gordon. And we think we might know why. She’s pregnant! Several spots around the web are contemplating Bobbi’s futuro-utero status, and while nobody from Bobbi’s camp has confirmed this rumored pregnancy, we think it’s a highly plausible scenario.

With the October 24 release of her reality show, which people won’t be able to resist watching, now is the absolute pristine time for rumorage of this nature to start surfacing. Perhaps the Browns are stealing a page from the Kardashian reality TV show playbook? As if Nick and Bobbi’s relationship isn’t controversial and weird enough . . . .

Nick Gordon is actually Bobbi’s adopted brother and, in a teaser of the show, you can see Bobbi K. Brown breaking the news to her appalled family members, who’ve viewed Nick as a part of their family since the age of 12 when Whitney took him under her wing. In the clip their engagement is revealed and family members are, to put it simply, not impressed. Awkward pants. “They want to see us fail,” Bobbi says in the clip. “Well, I got one thing to say. They won’t.” Watch the clip and witness the incredible drama for yourself — after watching it, you’ll desperately want her to be pregnant, just so we can see how her family will react!

If she is in fact carrying Nick’s baby the claws are definitely going to come out, as many of her family members view their relationship to be “wrong.” Media Take Out, with the picture of Bobbi and Nick at the event, says, “NOOOOOOOOOOOOO!!!! Whitney Houston’s Daughter BOBBI KRIS . . . Is PREGNANT!!! (And We’ve Got The Pics To Prove It)” and The Hollywood Gossip humors the idea as well. What do you think?

We’re not surprised to learn about this heavy rumorage, which was probably planted by someone in Bobbi’s camp, but we really wish celebrities would start discovering more creative ways to generate controversy/draw attention to themselves. Do you believe this rumorage? Let us know in the comments section below.