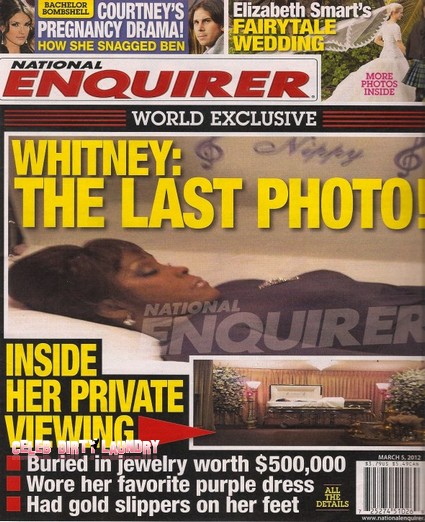 The person who took Whitney Houston’s uncensored final photo of her in her coffin is Raffles Van Exel.  This bum was hanging onto the deceased family after she died and attended two private viewings of Whitney’s casket.   The first on the Friday night before the memorial service and the second on Sunday morning before the actual burial.

The Whigham Funeral Home say that is was Raffles who took the photo and they have an employee who claims that he saw him do it. Whigham says that they told the Houston family of their suspicions when the picture appeared on the cover of The National Enquirer but they didn’t do anything about it.

More: Whitney Houston Never Forgave Her Mother For Busting Up Her Lesbian Relationship

Roger Friedman at Forbes elaborates:  Sources at the Whigham Funeral Home in New Jersey say they know, and they have an employee who saw the person take the picture. The person they’re pointing the finger at is Raffles van Exel, the hanger on I told you about in this column a couple of weeks ago. Van Exel, who has aliases of Raffles Benson and Raffles Dawson, was at the two private viewings of Whitney’s casket held at the Whigham Funeral Home. The first viewing was on the Friday night before the memorial service. The second one was on Sunday morning before the burial.

The people at Whigham noticed van Exel right away. Even though he’s not a member of the Houston family, he traveled with them on the private plane from Los Angeles to New Jersey. He was the only non family member who accompanied Whitney’s sister in law/manager and newly appointed executor Pat Houston in her car to Whitney’s memorial and funeral and to the viewings. According to one source, he even had his own bodyguard with him, which was more than a little unusual. A source from Whigham’s says when the picture appeared on the cover of the Enquirer, they told the Houstons of their suspicions. “They didn’t do anything about it,” says a source. “They’re protecting him. How come they haven’t gotten him out of their circle?”

The Whighams people are not happy about the Raffles connection. While conducting another funeral in another part of town, of the funeral directors says she was spat upon by a stranger. The funeral home is concerned that fans think they allowed the National Enquirer picture to be taken. They did not. “The Houston family invited everyone into that room. We had no role in that. We were told their security would handle everything. They didn’t give us responsibility for that.” About 35 people came to the first viewing. The Whighams didn’t know everyone. But they know none of their people were involved. Only one of their employees says they witnessed Raffles van Exel take the picture of Whitney in her coffin.

If Raffles took the photo then why is the family protecting him?  Even more mysterious is why they had the mooch around in the first place.  What do you think?  Let us know in the comments below.