Who Will Be Voted Off THE VOICE “Top 6” Tonight? (POLL & REVIEW) 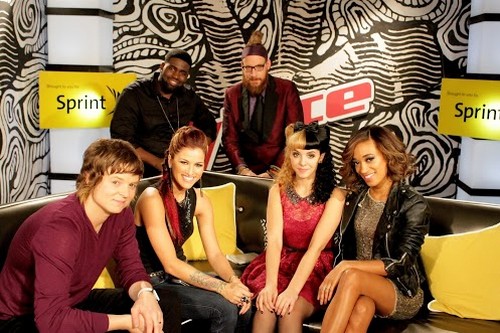 Last week on The Voice, the male model Dez Duron and the Queen wannabe Cody Belew, were voted off the show. Dez Duron’s elimination completely decimated Christina Aguilera’s team, and she was left to co-coach other singers. The final six remain in The Voice, and tonight, another two will hit the road quicker than a beaver with OCD. Celeb Dirty Laundry’s review guide and our official poll are below, so take a moment to see how your favourites did. Who do you think will leave the competition tonight? Who do you think is as done as fish cakes? Read on to find out and don’t forget to vote!

Amanda Brown – Team Adam – Natural Woman by Aretha Franklin & Here I Go Again by Whitesnake – The impeccable Amanda Brown’s first song, Natural Woman, showed her true diva worth – and we mean diva in a good way. Amanda is one of the best performers on the current cycle of reality television talent shows. Her voice is a brilliant and beautiful gift, and her pitch perfect notes merely support her already immaculate performance package. Her second song, Here I Go Again, further defined Amanda Brown as a superstar and a reality television force to be reckoned with. She was absolutely flawless, in every single way. It would be a travesty if Amanda doesn’t win.

Cassadee Pope – Team Blake – Stand by Rascal Flatts & I’m With You by Avril Lavigne – Cassadee has a strong vocal ability, but there’s so much lacking in her voice that her first song, Stand, came off as an emotionless humdrum of teen inspiration. There’s no denying that Cassadee’s voting bloc will take her even further in the competition, but is she the best singer? No. Her second song, I’m With You, stayed true to the original. Unfortunately, Cassadee didn’t show any diversity and originality in her performance. There’s a chance that this might be the end of the road for Cassadee…

Nicholas David – Team Cee Lo – September by Earth, Wind and Fire & Somewhere Over The Rainbow – Nicholas absolutely killed his first song, and ripped open the roof on his second song. It’s Nicholas’ unorthodox performing that makes him one of the most peculiar and most interesting contestants in recent years on The Voice. He might not be as contemporary as is required in the industry, but he damn well deserves his place on the show! Nicholas’ soul is unparalleled. We doubt he’ll win the competition, but he will get far enough to become a post-The Voice artist in his own right. Good on ya, man! Good on ya.

Trevin Hunte – Team Cee Lo – Walking On Sunshine by Katrina and the Waves & And I Am Telling You I Am Not Going by Jennifer Hudson – Trevin’s rendition of Walking on Sunshine came off as a tribute act. Nothing about this performance worked. It was campy, out of Trevin’s element, and shaky around the lean middle. Trevin’s second song, the seminal and brilliant Dreamgirls number, was out of this world. It is, without a doubt, one of THE most difficult songs for any singer to take on. There are so many opportunities for out-of-breath failure in this song, yet Trevin delivered every single note as impeccable and as perfect as the last. Technically, it was the best performance of the entire series.

Terry McDermott – Team Blake – I Want To Know What Love Is by Foreigner & Stay With Me by Rod Stewart – Terry’s first song, the overdone Foreigner classic, was a pitch-perfect rendition. Terry’s voice marinated in the notes and lifted ever so slightly to reach that beautiful, warm tone of his. Terry’s second song, the Rod Stewart classic, worked technically and artistically, but – and there’s always a but – we doubt this song would resonate well with the younger voting bloc on the show. He is still one of the best singers in the history of the series.

Melanie Martinez – Team Adam – Crazy by Gnarls Barkley & The Show by Lenka – Melanie’s first song, Crazy, was a haunting and eccentric version of the original. If Eurythmics and Lady Gaga had a love child, Melanie’s rendition of Crazy would have been the result. It was, without a doubt, absolutely fantastic. Melanie’s second song should have worked across the board, but it didn’t. It felt contrived and out-of-touch with reality. However, it should sell well with Melanie’s fans.

Who did you vote for? Who do you think should win the entire competition? Let us know in the comments and don’t forget to vote in our official Celeb Dirty Laundry poll below! Remember to bookmark Celeb Dirty Laundry for The Voice recaps, reviews, news, and official spoilers!