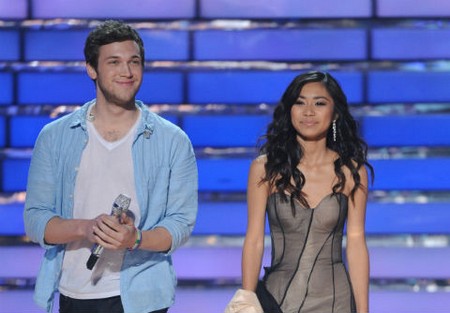 Another season of American Idol finished already!  Tonight is the finale and one contestant either Jessica Sanchez or Phillip Phillips will be crowned the next American Idol.   So who will win tonight?  Well it is anyone’s guess.  We conducted a poll today and our viewers are split right down the middle on who is going to be victorious.  If you have not filled out our poll yet, you still have time, go here!

On last night’s show the contestants performed three songs: his or her favorite song from the whole series.; one song selected by Idol creator Simon Fuller and  his or her individual “new” single.

Jessica’s best performance last night was “I Have Nothing” by Whitney Houston, if you missed it, you can watch the video HERE. Her worst was her single, “Change Nothing”, video HERE; all of the judges didn’t like the song and felt that it was the wrong genre for her.

Phillip Phillips best performance last night was his single “Home”, if you missed it, you can watch the video HERE. The judges loved the performance; they said that he was a true artist, brilliant and a genius. He did have a worst one as well, “Stand By Me” by Ben E. King, video HERE.

There will be many musical guests tonight including Rihanna,

So who are you rooting for tonight?  I have to admit I am team Phillip, but Jessica is an amazing singer too.  At this point I think it is anyone’s crown.  Hit the comments and let us know your thoughts!

We will be live blogging ‘The Finale of American Idol’ with all the up-to-the-minute details at 8 PM EST so make sure to come back to this spot and watch the show with us and find out how the Final 2 did! Refresh often to get the latest updates!

RECAP: The top former Idol contestants open up the show, all dressed in white and singing “Runaway Baby” by Bruno Mars. After an entire season of tough competition, tonight is the finale and in the next two hours the new American Idol will be named. A new world record was made last night, a staggering 132 million votes for Phillip Phillips and Jessica Sanchez combined.

The show begins with a star studded performance with Phillip and special guest, CCR’s John Fogerty singing, “Have you ever seen the rain?” and “Bad Moon Rising”.

Next up is Joshua Ledet singing Elton John’s “Take Me To The Pilot” with special guest and former Idol, Fantasia Barrino. It’s Mantasia and Fantasia together at last!

The Idol women put on a medley performance of various songs, then they break into “Every Woman” and Chaka Khan joins them on stage and shocks us by looking absolutely fabulous at 59. We get to see Jane Lynch in the audience, she looks like she’s having fun.

Time for Ford to give away some cars, a Ford Escape goes to each of Phiilip and Jessica’s music mentors and guess what, the top 2 get their own Ford Fusions.

Rihanna performs next and she’s too good to be singing with any of the Idols. She’s inside a huge pyramid with lots of green lasers and emerges looking really hot.

Skylar Laine is back and she is singing a country song, “Turn On The Radio.” Hold on, who is that coming on stage – it’s the second best-selling female country artist of all time, Reba McEntire.

Now we get a sneak peek into Steven Tyler’s dressing room, he has Playboy bunnies and a sloth! There’s more, a ceramic monkey, an organ, a skunk, a zebra with a big butt and Randy smoozhing with the bunnies.

Once again, Jessica Sanchez singing “I Will Always Love You”

One of the hottest women on the charts, she takes on two songs, Jennifer Lopez. Lil Wayne helps out with the background music, giving us some “put your hands up”. Ok, off comes her shirt, kind of what we expected.

Ace Young proposes to Diana DeGarmo, but first, Ace plugs in Dave Webb Jewelry. Diana claims to be speechless, but I think Dave Webb is as well to know that he just got his name pugged to millions of viewers.

Hollie Cavanagh is up next singing, “You’ll Never Walk Alone” and Jordin Sparks joins her on stage looking fabulous!

Ryan pays homage to Robin Gibb who passed away this week and the top 12 guys are going to sing some of his legendary hits. I know the guys are trying hard, but there is no singing Robin’s songs, just no replacement for such an amazing artist – I almost wish that had not done this. Hold on, what’s this? Joshua Ledet actually sings “You Don’t Know What It’s Like” and nails it. I always thought he should be the winner tonight.

Finally, somebody worth listening to tonight, Steve Tyler joins his band Aerosmith on stage. But as much as I love him, I’m left wondering why Idol needed to put both judges up on stage, couldn’t they find any other musicians wanting to take the stage?

Now, the final two, Phillip and Jessica sing, ‘Up Where We Belong”. I always thought Phillip reminded me a lot of Joe Cocker, this is a great song choice.

Time for the finalists to come up on the stage, one is going to be the next American Idol. The results envelope is going to be opened and the winner is PHILLIP PHILLIPS.