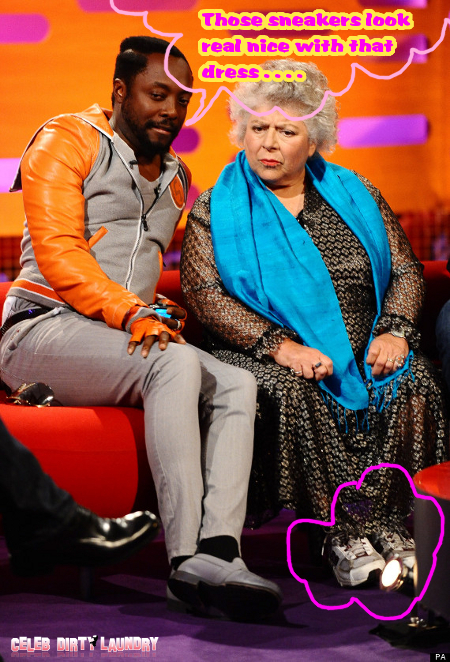 Will.I.Am almost had an embarrassing moment with the Queen at the Diamond Jubilee celebrations, and to top it all off, he was left utterly speechless after Harry Potter actress Miriam Margolyes said that she was fascinated by him “being black,” which was said on The Graham Norton Show.

Celebrityviplounge.com recently reported about Will.I.Am’s lack of etiquette when he tweeted while he carried the Olympic flame. On Monday night, he sat in front of the Queen when he logged on to Twitter to tweet about his experience with the royals, when UK singer Cheryl Cole stopped him and informed him of the proper etiquette.

Cheryl Cole told camp talk show host Graham Norton, “I actually had to warn him as we walked on to the stage. He had the phone at the ready. I’m not joking, I had to say to him, ‘Put that phone away right now before I kill you.’”

Will.I.Am had a little karma slap him in the face due to his nonchalance concerning royal etiquette, when Miriam Margolyes said to him, on air, “I’m just fascinated by you, because, unfortunately, I don’t know many black people in show business.” Will.I.Am laughed nervously after Margolyes’s statements about him, before Graham Norton said, “It’s lovely Miriam, you’re right!”

Will.I.Am might not be able to control his Tweeting obsession around the Queen, but he is actually a bit of a philanthropist. He raised $7 million to build a Science, Technology, Engineering and Mathematics centre in L.A.’s ghetto, so we forgive Will.I.Am for his royal transgressions.

After Miriam Margolyes learned about Will.I.Am’s philanthropical nature, she said, “You’re fabulous! It’s so unexpected that a rapper would do this!”

We love Will.I.Am for his unconventional rapper nature, even though he pissed off the Queen!

Readers, tell us what you think of Will.I.Am and Miriam! The video of Miriam’s “comment” hasn’t been released as of yet, but the below video has a good long segment involving Miriam and Will.I.Am.