Will Kim Kardashian Give Kris Humphries A Huge Payoff To Keep His Mouth Closed? (Photo) 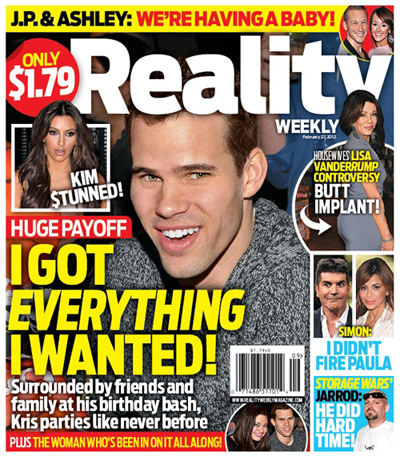 The current issue of Reality Weekly Magazine features a cover story about Kim Kardashian and Kris Humphries, entitled ‘I Got Everything I Wanted.’

Now, it’s safe to assume that, as millionaires, both Kim and Kris are pretty used to getting what they want, but in this case, the magazine cover is referring to a smiling Kris, who reportedly may be in for a huge payoff from his estranged wife in order to keep his mouth shut about all of her secrets and the details of their failed, 72 day marriage.

And let’s not forget, Kris has not been letting Kim’s divorce filings go quietly into the night. Instead, he is reportedly fighting to have the marriage annulled and declared a fraud, which would then void the prenup that he and Kim reportedly signed. And, if there’s no prenup in place, that could mean that the basketball player could walk away with substantially more money from Kim than he otherwise would.

Supposedly, at his recent 27th birthday party in New York, Kris was partying “like never before.” Was it because he knows that Kim is going to be forced to shower him with money? Or could there already be a new woman in his life who’s helping distract him from all of the drama with his soon-to-be ex-wife?

To find out more about Kim and Kris’ ongoing divorce drama– pick up the current issue of Reality Weekly for all the details!