Will And Jada Smith Divide Up Their Kids For Divorce 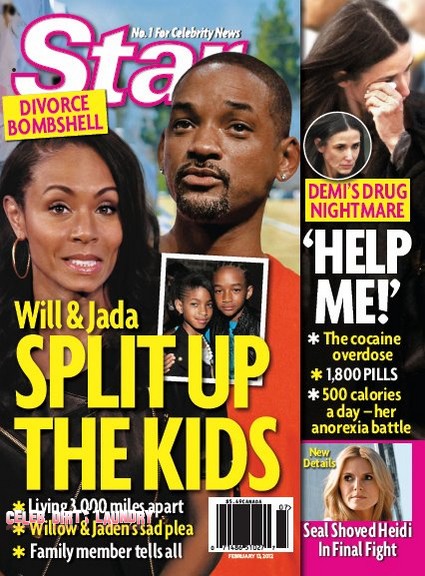 The current issue of Star Magazine features the cover story of the sad splitting up of the family and dividing the children between them as Will Smith and Jada Pinkett-Smith prepare for divorce. Will married Jada Pinkett in 1997 and together they had a son, Jaden Christopher Syre and a daughter, Willow Camille Reign. Both kids are already big stars in their own right but no doubt feel the pain of their parent’s split.

Star claims that the couple are living 3000 miles apart and that Willow and Jayden are pleading with their parents to reconcile. The print edition will reveal what family members have said about the situation – and you can be sure it’s nothing nice.

Trouble has been brewing for Will and Jada for along time and many in Hollywood have said that their marriage is simply a front – that the couple have carried on an open marriage for a long while and simply staying together for appearances sake. As we reported on Celeb Dirty Laundry appearances broke down when Will was photographed partying with a hot blond and without Jada. Photos show Will with the unidentified blonde as the drinks and good times flowed at one of the Miami area’s ritziest romantic hideaways.

Rumors were making the rounds at that time that Jada had hooked up with her HawthoRNe co-star, Marc Anthony.

As recently as last summer Will and Jada issued a statement flatly denying reports of any separation. They said at that time:

“Although we are reluctant to respond to these types of press reports, the rumors circulating about our relationship are completely false. We are still together, and our marriage is intact.”

Sadly it seems that the end is near for the couple’s marriage. Which parent will get which child?