Will Smith and Jada Pinkett Smith’s Daughter Willow Smith The Next Lindsay Lohan? 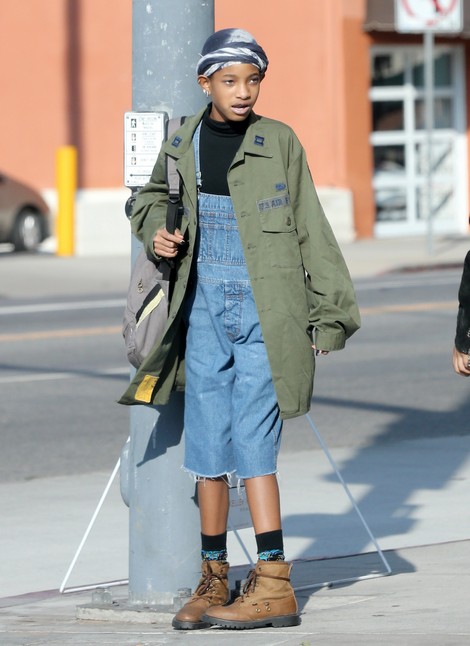 I’ll admit it. Every time I’ve seen Willow Smith in the last two years I’ve wondered why her parents aren’t keeping a better eye on their kid. Will Smith and his wife Jada just seem to have let Willow run wild and now it’s becoming even clearer that they are at parenting odds. Jada thinks Willow is a huge star in the making and has sort of let her run wild while Will seems to realize that too much freedom has resulted in a sad, lost little girl. Willow stepped out the other day wearing a jacket that had scrawled on the back of it, “I hate everyone.” And Will flipped out, perhaps finally realizing that his daughter is in a bit of emotional trouble.  The National Enquirer has more,

“That jacket just screams for at­tention. It’s a garment tattoo that says Willow feels like an alien in this world. She feels misunderstood, like an outcast who is not truly being seen or heard.  Wil­low’s behavior is clearly a cry for help. If Will and Jada can’t resolve their differences on how to raise her, Wil­low may well nosedive even further. She’s turned into a little girl lost.” says Psychologist, Terry Lyles.

Willow herself has used social media to express her inner pain. She has Tumblr, Twitter and Instagram accounts that show a young girl that is really struggling with herself. Some of her more memorable postings have included,

If Will and Jada have paid attention to her postings then I have to wonder why they haven’t tried to get her help sooner. If she was my daughter (or yours) we would take these statements pretty seriously, wouldn’t we? I have to wonder if Jada has just down played it until now, thinking that Willow is just another tortured artist and that carrying herself this way is part of the game. Do you think Will can successfully intervene and get Willow the help that she needs before she turns to drugs or alcohol to escape her own thinking? Tell us your thoughts in the comments below!