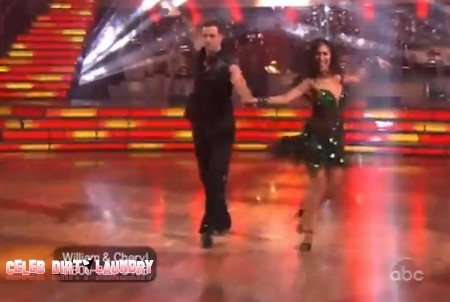 Eighth up tonight is Latin heartthrob William Levy as Dancing With The Stars kicks off season 14.  Twelve contestants get to compete for the mirror ball trophy.  Dancing either the Foxtrot or the Cha Cha, the couples will be sure to surprise audiences with exciting performances throughout the evening when they hit the ballroom floor for the first time on live national television.

William Levy and professional dancer Cheryl Burke danced the Cha Cha Cha.   The crowd goes insane and it is hard to calm them down.  He certainly has the moves and he can dance.   He is a real cutie!!

Judges Comments: Bruno – DWTS presents the hottest package of the season – the crowd is crazy about you and you are overdressed. Carrie Ann – she would like to thank ABC for her job – you can dance – I really like the way you move. Len – you captured the spirit of the Cha Cha Cha. Well done!

Scores:  Carrie Ann – 8  Bruno – 8  Len – 8  Total – 24 – So far he has the highest score of the evening and the crowd loved him the most.  They are really pushing how hot he is to get everyone interested!

Watch the video below and let us know what you think?   Sound out in the comments below!