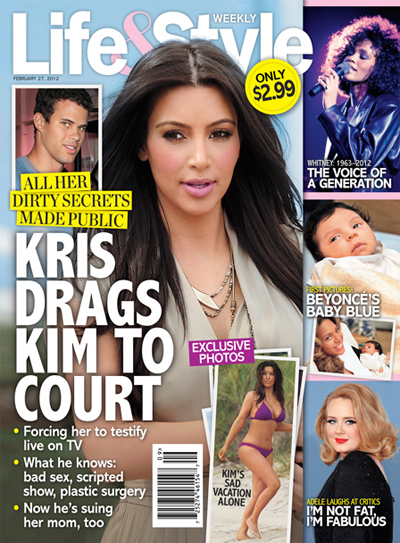 The current issue of Life & Style Magazine features the cover story, ‘Kris Drags Kim To Court.‘ According to the mag, the diabolical Kris Humphries is plotting to enact his revenge on his estranged wife Kim Kardashian by making their divorce as spectacular an event as their televised wedding!

Reportedly, not only is Kris is hoping to force Kim to testify on TV during their divorce trial, but he’s also planning to reveal all of the secrets he knows about her life, including the fake, scripted aspects of her reality shows, her trips to the plastic surgeon’s office and even details about their non-existent sex life!

“Kim’s freaking out,” a source told the magazine. “All of her dirty laundry will be aired and there is a lot to air. Kim is a calculating person who does things to benefit her wallet. That’s her top priority! Everything will come out in court — even their sex life.“

Kris is also supposedly planning on suing Kim’s mom and manager, Kris Jenner, because he feels that she favored Kim and didn’t treat him fairly, when making business deals for the couple while they were newlyweds.

To avoid what is mounting to look like a lot of negative press for her, Kim did what she does best last week and flew to Miami for some R&R.

“Kim feels like she’s trapped in a nightmare that just won’t end,” said a friend of the 30-year-old reality star to Life & Style. “Every time she thinks things are getting better, something awful happens and she goes back into a pit of depression.”

And despite her reputation as a party girl, Kim is (mostly) keeping to herself during this trip.

“Miami is a sanctuary,” another friend added. “In LA, everyone harasses her about the divorce.”

To find out more about Kim’s trip to Miami and her divorce from Kris Humphries– pick up the current issue of Life & Style Magazine for all the details!