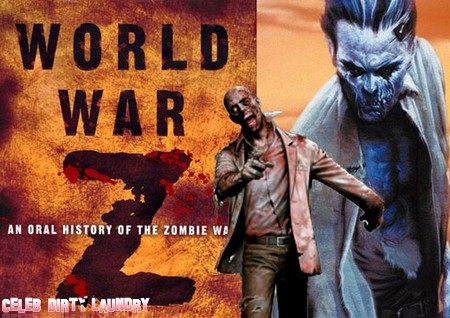 Director Marc Forster and Paramount Pictures have stated that if possible they’d like to make World War Z a trilogy, even though the story is only done in one book. Also the book isn’t all that long, so it’s really hard to imagine that it will be possible to make it into a trilogy.

Apparently Brad Pitt will be playing the protagonist Gerry Lane, a father and worker for the United Nations who is trying to find the reason for the outbreak. I haven’t actually watched a movie with Brad Pitt in it for over 5 years and I’m not the biggest fan of him, so I’m not sure if I’m all excited to see him playing the lead role.  I can’t do anything but to hope for the best and I really hope this zombie movie isn’t ruined.

This movie is supposed to be the most expensive zombie movie made to date in history, but that doesn’t instantly make it good. It’s always quality over quantity, just because a lot of money is being put into this project doesn’t mean we’ll get an amazing movie.

I personally hope that this movie does lead to success, because it’s been so long since a great zombie movie has made and I am a huge fan of them.  But, I’m not so sure that this one will be.  For some unknown reason they have made the decision to release World War Z into theatres two days before The Hobbit, not a good decision.

So my hopes have simmered downed to nothingness, because I for one will only have The Hobbit on my mind and forget all about this other movie’s existence.