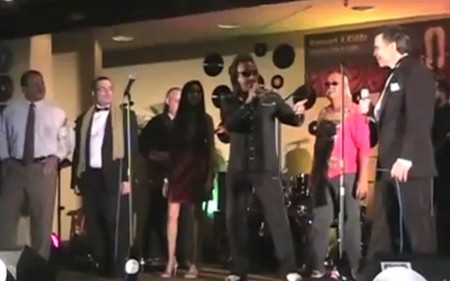 WWE Legend and Recording Artist “The Mouth of the South” Jimmy Hart sings his hit song “Keep on Dancing” which ranked in the top 5 on the Billboard Charts. He’s joined on stage by other Former WWE Superstars Brian Blair and Lanny Poffo. Also on stage is “Mr. Hollywood”  Shannon Rose and on guitar is Johnny G. Lyon.

This was performed for the Koncert 4 Kiddz annual charity, raising money for children with cancer, so they can receive the life saving treatment they need.

Jimmy Hart’s song was performed by the Gentry’s in the mid 1960s. It’s timeless vocals and rhythm have made it one of the most memorable songs from the decade. Its still played today on many classic rock stations across the country.

“The Mouth of the South” Jimmy Hart became a Pro Wrestling Legend with his iconic megaphone. He managed the WWE Intercontinental Heavyweight Champion, The Honky Tonk Man, who defeated Ricky “The Dragon” Steamboat for the belt. He managed the long standing WWE Tag Team Champions, the Hart Foundation, who took their belts from the British Bulldogs. Jimmy Hart also managed Greg “The Hammer” Valentine and Hulk Hogan. He’s been featured in WWE and the WCW among other top wrestling corporations.