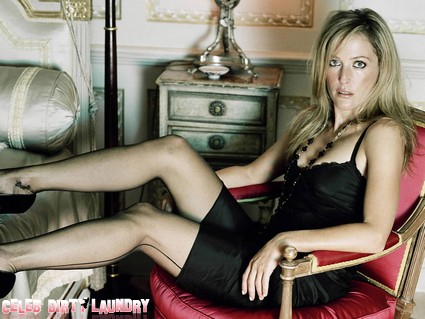 Gillian Anderson likes it both ways. The former X-Files star has outed herself as bisexual. The Mother of three has admitted to relationships with men and women over the last couple of decades.

Gillian is telling all in the latest edition of OUT magazine. The 43-year old says her first lesbian relationship happened as a teenager in high school when she moved to the US from her native UK. It was more than a crush and changed the way she saw the world. That’s been followed by numerous flings over the years. Ironically Anderson – who was once voted the sexiest woman in the world – has always been a popular pinup with the gay community.

But Gillian says despite enjoying intimacy with girls and guys – she remains very attracted to men. She knew even as a teenager that a long term love affair with a woman wasn’t on the cards. The actress liked men too much and didn’t see herself staying in a lesbian relationship. She’s now been married twice and has a teenage daughter and two young sons.

The woman who graced our TV screens as Scully in the 1990s tells the mag  ‘If I had thought I was 100% gay, would it have been a different experience for me? Would it have been a bigger deal if shame had been attached to it and all those things that become huge life-altering issues for youngsters in that situation? It’s possible that my attitude around it came, on some level, from knowing that I still liked boys‘