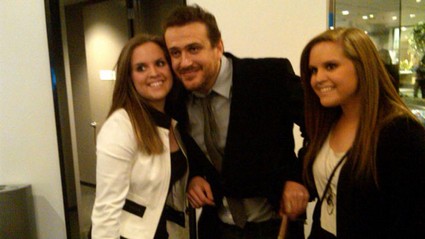 So it’s a pretty much given that in order to get a date with any celebrity all you have to do is put together a You Tube video asking the said celeb out.  It can be a song, a dance – anything!  You’re pretty much guaranteed an outing; otherwise your crush will forever come across as a mean, mean person for not granting your one true wish of a date.

Take Justin Timberlake, Mila Kunis, and now Jason Segel.  A fan of Jason’s, Chelsea Gill, recorded a You Tube video on New Years day where she wrote a song and played her guitar asking if she could buy Jason a drink.  The Muppets star, being the swell guy that he is, invited Chelsea and her twin sister to not only meet him for drinks at the Ritz-Carlton, but to accompany him to the Chicago Film Critic Awards.

Upon hearing Chelsea’s video, Segel tweeted:  “My favorite thing, maybe ever. I am in awe.  Response on the way.”

Chelsea, naturally blown away, told Chicago Tribune that she ‘freaked out’ when she learned he listened to her song.

She told the Tribune that Segel was “down to earth” and a “sweetheart”.

How sweet.  I wonder if Robert Pattinson will respond to a You Tube video.  Hmmm … my brain is on overdrive.