BY Scuttlebooty on May 12, 2012 | Comments: Leave Comments
Related : Interview 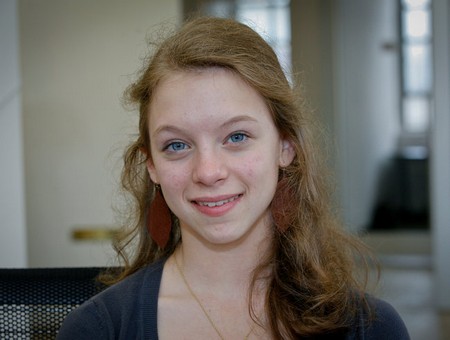 At an age when most girls want to hide behind the magic and infinite possibilities pictured in glossy magazines, Julia Bluhm is demanding more reality. Along with friends and supporters, the 13-year-old waited in the rain outside Seventeen magazine’s headquarters last week in order to deliver a petition asking it to stop photoshopping its models. The petition had close to 70,000 signatures.

“I’ve always just known how Photoshop can have a big effect on girls and their body image and how they feel about themselves,” Bluhm told The Huffington Post. “You need to see something realistic — you need to see a reflection of what truly represents a teenage girl nowadays.”

Bluhm might want to see a reflection of a typical teenager but her actions are making her stand out as quite the exception. She started the Change.org “Seventeen Magazine” Give Girls Images of Real Girls!” campaign because she wants to stop magazines, toy companies, and other businesses from creating products that break young girls’ self-esteem.

She isn’t asking Seventeen to stop photoshopping all together, rather she is only asking for one spread per issue to portray women as they are – no more, no less.

And Bluhm’s not the only person raising her voice against photoshopping. Brad Pitt, Cate Blanchett, and Kate Winslet have all had run-ins with magazines displaying them in a different light – one that hides wrinkles, vanquishes pounds and distorts body parts. To make a statement, Blanchett covered Intelligent Life magazine’s March/April edition completely untouched and it was striking.

Bluhm managed to hand her petition to Editor-in-Chief, Ann Shoket, and voice her concerns face to face. Although nothing has changed as yet, the magazine did have this to say about the young activist:

“….we believe that Julia left understanding that Seventeen celebrates girls for being their authentic selves, and that’s how we present them. We feature real girls in our pages and there is no other magazine that highlights such a diversity of size, shape, skin tone and ethnicity.”

Even Rome wasn’t built in a day so Bluhm should be proud that she got in the front door of the influential magazine. Any publicity directed towards this topic is beneficial. And change can happen. Even fashion bible Vogue can see the tides are turning towards a healthier body image and has acted accordingly.

Just last week it issued, “The Health Initiative” which aims to encourage a healthier approach to body image in the fashion industry. The magazine’s editors promised not to picture models under the age of 16 or those they believe to have an eating disorder. In addition, it plans to encourage designers to be more realistic about sample sizes and will offer healthier eating options backstage at fashion show. It doesn’t touch on photoshopping but it’s definitely trying to take more responsibility for the way its pages affect young women.

Do you think Bluhm did a brave thing or are you a fan of the perfect pics and think they don’t really have as much impact on young women’s self-esteem as she thinks?