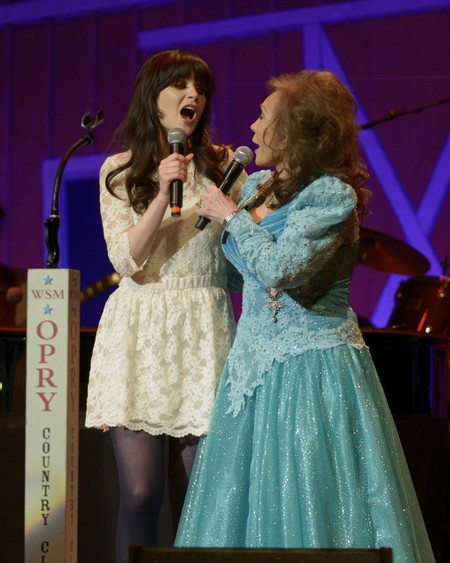 We already know that Zooey Deschanel is multi-talented – not only can she act – the girl can sing as well.  So it only seems fitting that her next project be Broadway right?

Zooey hit up the stage last night with country crooner Loretta Lynn at the Ryman Auditorium in Nashville, Tennessee.  She was brought onstage by the singer to sing alongside Loretta’s famous signature song, “Coal Miner’s Daughter”, where afterwards the music legend announced that she had chosen Zooey, 32, to portray her in the upcoming Broadway production about her life.  Quite the honor Zooey!

Zooey gave a statement to People magazine saying:  “Loretta Lynn and her music have been inspirations for me for as long as I can remember. She is a true legend and to be chosen to play such an iconic woman is a dream come true”.

Loretta, for her part had this to say of choosing Zooey:  “It’s a long way from Butcher Holler to Broadway in New York City. I never imagined I’d see Coal Miner’s Daughter on a movie screen,” Lynn said referring to the 1980 film that won Sissy Spacek a Best Actress Oscar for her performance. “Now I can’t believe it’s going to be on a stage for people to see. I’m going to be right there in the front row. And I know Zooey is going to be great—she sings and writes her own songs just like I do, and we even have the same color eyes!”

While no opening date has been set, Zooey no doubt will have her hands full in the upcoming months. In addition to prepping for her Broadway role, she is starring in the new hit Fox Comedy, New Girl.