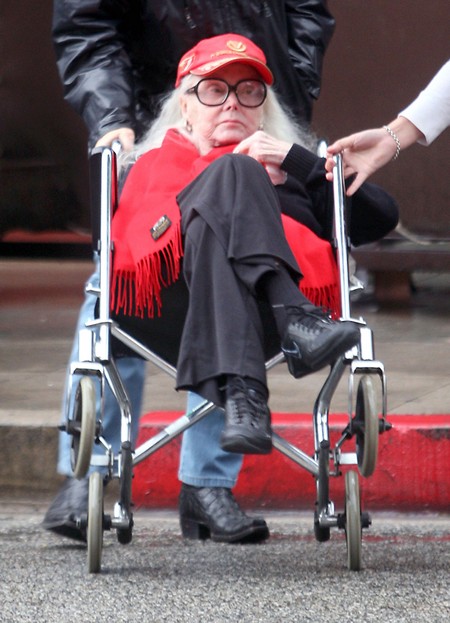 Zsa Zsa Gabor is suffering terrible abuse at the hands of her husband, the evil Prince Frederic von Anhalt.  Her daughter, Francesco Hilton, will ask a judge to appoint a conservator to oversee her mother’s finances and medical care.

Francesca is the 95-year-old actress’ daughter from her second marriage to Paris Hilton’s great-grandfather, Conrad Hilton.  Francesca is unhappy with the care her mother is currently receiving from the Prince von Anhalt and will file a conservatorship petition in a Los Angeles court today.

Her lawyer, Kenneth Kossoff, said:   “What Ms. Hilton is seeking here is for the court to make sure that Zsa Zsa’s best interests are not being sacrificed for the selfish interests of anyone involved in Zsa Zsa’s life.”

She is also concerned that Frederic – who is 27 years younger than Zsa Zsa – keeps her mother “isolated” and “heavily sedated” and has cited a $700,000 loan he took out against Zsa Zsa’s Bel Air mansion as worrying.

Mr. Kossoff added:   “In spite of her conflicts with von Anhalt, Francesca has been hoping he had Zsa Zsa’s interests at heart. However, having just recently learned that he took out a $700,000 loan, and that there was a notice of default recorded against the property in late February 2012 because he apparently has not been paying Zsa Zsa’s mortgage payment, it became clear to Francesca that if she did not seek to protect her mother, no one else would.”

Francesca claims in the petition that her mother – who has suffered a series of health problems including having her leg amputated last year – has also become isolated from her close friends because of Frederic, 68.

She also raised concern about “remnants of some bedsores” and “lesions on my mother’s face”.

Francesca added:   “I am very concerned that her medical needs and treatment are not being managed in her best interest.  I also believe that my mother now may suffer from a loss of intellectual and emotional faculties, which may be induced by the medication my mother is being given.”

This is terrible news.  There is nothing more horrible than elder abuse.  We hope Francesa is successful in saving her mom.