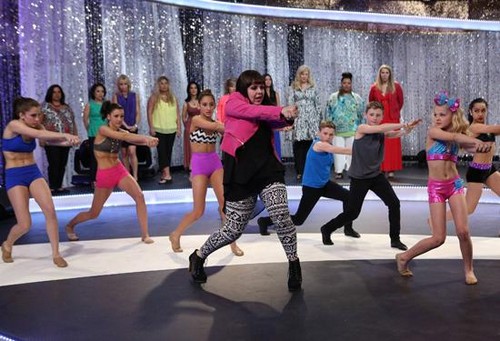 Tonight on Lifetime Abby’s Ultimate Dance Competition returns with another new episode called, “Down the Rabbit Hole.” On this week’s show Nerves are at an all-time high and nothing is off limits when it comes to making the final three..  Did you watch last week’s season 2 episode 10?  We did and we recapped it right here for you.

On last week’s show it’s “Diva” week and our dancers and their moms were happy to oblige. In a fierce dance version of kickball where the kids got to choose their dance styles one-by-one, leaving one unlucky dancer with a style no one else wanted. Some of the dancers chose wisely, but others found themselves on the wrong side of the biggest diva in the house–Abby Lee Miller, of course.

On tonight’s show all of the dances this week are inspired by “Alice in Wonderland.” With the numbers dwindling, the competition heats up more than ever and when one mom sabotages everyone, her daughter pays the price. Nerves are at an all-time high and nothing is off limits when it comes to making the final three.

Tonight’s episode is going to be a drama packed one, which you won’t want to miss. So be sure to tune in for live coverage of Lifetime’s Abby’s Ultimate Dance Competition Season 2 episode 11 — tonight at 9PM EST.

RECAP: The contestants arrive into the challenge room, now there are only four competitors left; Abby mentions that this is the last challenge and before the finale. Today’s performance is focusing on character portrayal and it’ll be based on Alice in Wonderland this week. Tessandra will teach the choreography in today’s challenge this time, Abby gives out characters for the four girls to portray during the choreography; they begin with the white rabbit. Trinity is dropped first, now they’re a door mouse. McKaylee believes that it’s really hard to portray different characters on the spot while dancing, McKaylee is cut and now there are two Kalani and Gianna. Now it’s the Queen of Hearts, Kalani is cut and Gianna wins the challenge this time. Cindy is proud of her daughter winning today, this time Gianna will serve as casting director and she will decide who the contestants will portray. Kalani believes that she’s better than Gianna, and knows that Cindy and Gianna see her as a threat. Trinity is given Alice’s role, Kalani is given the Rabbit and McKaylee is given the Cheshire Cat. Everyone feels like they’re being sabotaged because of the decisions that Cindy and Gianna made, they’re being stupid it’s a competition deal with it. Abby knows that everyone is given their weaknesses.  Trinity is practising her choreography; Trinity feels that it’s going to be hard to portray Alice because she’s an aggressive dancer and not a soft one. Abby watches the choreography and tells Trinity that her feet aren’t spot on, Abby wants Trinity to pull through. Gianna is practicing her choreography and Abby walks in to watch what she’s got so far, Abby is peeved about the characters that the competitors are portraying. Cindy thinks she made the best decision this week, Abby watches the choreography and she mentions how the hip needs to be turned over. Cindy it takes it the wrong way, with Abby giving constructive criticism; Kelani is practicing her choreography, Abby walks in and watches it and you can see that she’s made a couple of mistakes. Abby has a feeling that Kalani has been set up and that she needs to prove a lot this week. The mothers talk about Cindy’s decisions; they don’t understand what a competition is; though Cindy is a bitch you can’t deny she made smart decisions. McKaylee is doing her choreography of the Cheshire Cat; Abby watches what she’s got so far; Abby can notice a little bit of stuff that’s similar to a white rabbit.  She wants to see more of a cat. McKaylee is very nervous about tomorrow; she’s stressed out about it and talks to her mother about it. Kalani looks very tired; her mother doesn’t believe that she’s trying hard enough. Kalani doesn’t want her mother coaching her; she doesn’t like it when she tries to but in. Kalani’s mother wants her daughter to try harder and to stop being a brat. The mothers and contestants walk into the dressing room; they’re getting their daughters ready for their performances. You can see that all of the contestants are feeling very stressed about their performance because they were “sabotaged”. Rachele, Richy and Abby are introduced; Abby then goes about how this week is inspired by Alice in Wonderland. McKaylee is up first to perform her Cheshire Cat performance, Rachele brings up that McKaylee was at her best tonight, and that she has the goods; Richy really enjoyed the performance, he brings that she was lip syncing a bit; Abby brings up that she didn’t go all the way for a cat like performance. Cindy is being very hard on her daughter, wanting her to go all the way. Cindy wants Gianna to wow the judges completely; Gianna comes out and gives her performance which is inspired by the Mad Hatter. Richy stands up and gives the finger wave; Abby mentions that Gianna’s footing was a bit off at parts. Richy still gives the finger wave, regardless of what Abby said; Rachele gives her a head role and a bite the apple too. Kalani goes out to perform her White Rabbit inspired performance. Richy gives a standing finger wave also, he brings up that it was so good. Rachele got to see a new Kalani this evening apparently; she her give some hits that she didn’t expect Kalani to have. Abby loved the facial expressions were dead on, but she messed up and made one error. Trinity is up next to give her Alice inspired performance. Richy mentions how more hip hop dancers feel like they have a better chance at going to a different genre of dance. Abby brings up that this was a letdown for Abby this performance. Rachele disagrees with Abby and believes that Trinity did a great job and sees potential in her. Richy, Abby and Rachele are deciding on who they’re sending home tonight; there looks like a lot of disagreeing between them all, Trinity knows she’s going home tonight because of Cindy’s decision. The judges have made a final decision. The contestants and the mothers get out on the stage; the best characterization tonight was Gianna. Gianna will be moving onto the finals, Gianna is happy that she’s going to be getting into the finals. Abby brings up McKaylee’s lip syncing, Kalani’s performance wasn’t enough for Abby and Trinity’s performance didn’t blow her away like she was hoping. Turns out that Abby has decided not to send anyone home, everyone is completely shocked by it; Trinity is happy to be given a second chance. Cindy’s plan completely backfired like crazy; Abby says that now they’re all going into the finale. It’s now or nothing at this point, everyone needs to bring their A game.