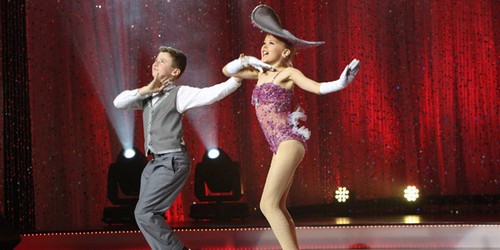 Tonight on Lifetime Abby’s Ultimate Dance Competition returns with another new episode called, “Divas in the House.” On this week’s show some of the dancers choose wisely, but others find themselves on the wrong side of the biggest diva in the houss.  Did you watch last week’s season 2 episode 9?  We did and we recapped it right here for you.

On last week’s show with the week’s theme of “Nightmares,” the dancers tackled all kinds of things that go bump in the night… while their moms had trouble keeping their inner monsters in check. The claws came out when one mom tried to sabotage another with dance assignments. And then, the worst nightmare of all, teen angst hit some of the dancers and they turned on their mothers.

On tonight’s show it’s “Diva” week and our dancers and their moms are happy to oblige. In a fierce dance version of kickball where the kids get to choose their dance styles one-by-one, leaving one unlucky dancer with the style no one else wanted. Some of the dancers choose wisely, but others find themselves on the wrong side of the biggest diva in the house–Abby Lee Miller, of course.

Tonight’s episode is going to be a drama packed one, which you won’t want to miss. So be sure to tune in for live coverage of Lifetime’s Abby’s Ultimate Dance Competition Season 2 episode 10 — tonight at 9PM EST.

Here is the recap!

On tonight’s episode, the Top Five now have to conquer the theme “Divas”. This week challenge is also a dance battle. The person they have to go up against is Asia. This little diva has to help Abby judge the others’ aptitude and attitude.

In usual cattiness, the moms are all looking forward to someone else’s daughter to fail. At one point one of the other dancers couldn’t help clap for Asia. Seeing a seven year old booty pop is funny. In round two the remaining two girls left have to face up against each other with Asia helping Abby judge. In a battle between Kalani and Mckaylee the winner ends up being Kalani. Some moms feels like Abby favors Kalani so when she won it wasn’t a big of a surprise.

As the winner Kalani gets to pick what she’ll be dancing and who gets to pick next. She picked Jojo and Jojo then picked (her mother’s choice) Trinity. Trinity picked the duet to do with Jojo. She knows the last time they danced together she was able to outshine her. The last pick went to Gianna much to her mother’s frustration. Later she can’t help going after Jojo’s mom. She really just want to get rid of Jojo who she feels should have been sent home long ago.

Abby was disappointed in Kalani’s choice. She’s seen her do sassy jazz before so she wanted her to try something new. During Gianna’s practice some of the other moms came in to watch. Their presence flustered Gianna ans she keeps making mistakes in front of them. Once their done taunting a child they leave snickering.

Even as they’re preparing their daughter to go onstage the women tell them to take down the competition. Especially Trinity’s mom who forgot her daughter is supposed to be in tune with her duet partner Jojo. How is that going to work?

Gianna performs Marie Antoinette solo in her “Let Them Eat Cake”. Her showcase impressed nearly everyone except Abby. She noticed Gianna’s shoes were dirty and there was a minor technical she didn’t like. The other judges were able to see her performance transcending dirty shoes. Backstage, Gianna’s mom starts cursing and her preteen daughter has to tell he to calm down.

Mckaylee has to do a solo on Cleopatra. Her mother is worried though. She fears her daughter won’t be able to bring diva. Witch such ringing endorsement what does she do? Proved her mother wrong. Abby said she brought diva. The negative comment didn’t come from Abby. One of the other judges had told the dancer to be careful about moving her props. All in all not bad.

Kalani went with the safe choice of sassu Jazz. If she fails then it will be double hard with her not only having first choice but also that she won in this area before. Abby hadn’t liked the dance. The only person that did was Michelle. She claimed she saw Kalani bring diva. Well, it flew over the other judge’s head.

The next up is Trinity and Jojo. Trinity was great. So great that she made Jojo look like she was floundering. Abby had nothing bad to say about Trinty and only bad thigns to say about Jojo. Jojo should never had danced a duet and she shouldn’t have listened to her mother and pick Trinity to go next. That sunk her and she could go home.

The judges can’t seem to agree on anything but Gianna was the first to be called safe. Then it Mckaylee. He finally stepped up her game. Trinity was never goignt o go home. She left Abby silenced so she knew she was safe leaving Kalani and Jojo.

Between the two they both left the judges disappointed. Although Jojo did worse. She gets sent home and she does it in style earning her a standing ovation. But she got really close to Kalani and it’s going to be hard being separated. Gianna’s mother cheered the decision not so secretly.