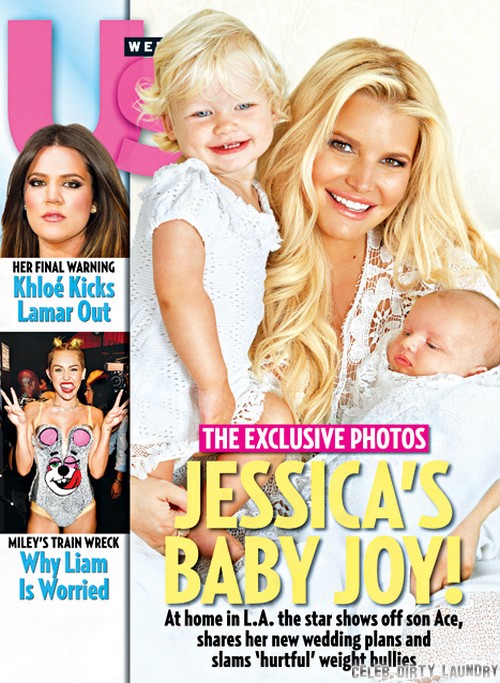 Whose baby is cuter, Jessica Simpson’s, Ace Knute Johnson or Kim Kardashian’s little Nori?  Whatever you think, here is the massively photo-shopped first pic of Jess with son Ace and daughter Maxwell.

Three days after Miley Cyrus took the stage for the 2013 VMA’s it’s still pretty hard to get the visual of her twerking while her tongue hangs out of her mouth, out of my head. Chloroxing my eyeballs wouldn’t remove it because there are simply some things that you just can’t unsee. Can you even imagine how Liam Hemsworth must have reacted when he watched his exes’ shit show? I mean when they first hooked up she was a typical beach girl and as she decided to walk on the wild side Liam took several steps back- or towards other naturally beautiful women instead!

According to the Sept. 9th print edition of US Weekly Liam is really worried about Miley. Despite breaking off the engagement he still cares about her and certainly doesn’t want her to completely derail what had one point seemed like an enviable career. He no doubt is worried that her flagrant drug use combined with running with a really rough crowd will ultimately completely unravel Miley’s likability and credibility.

Also in the new issue of US you can keep tabs on Khloe Kardashian and Lamar Odom’s marriage. The status of their ongoing train wreck seems to change daily thanks in part to Kris Jenner’s feeding the press scandalous nuggets that aren’t necessarily true. Also nearly two months after delivering her son Jessica Simpson is finally showing him off as she and her entire family decided to pose for a stunning photo spread in the Sept. 9th issue.