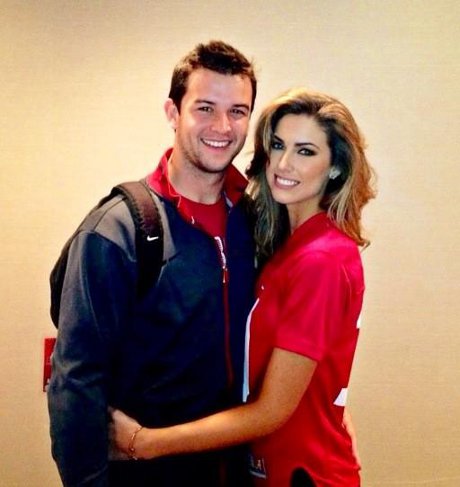 Miss Alabama USA Katherine Webb and AJ McCarron are dating, and it just might be that AJ is jealous of all the media attention his girlfriend is receiving after ESPN Brent Musburger openly rambled onscreen about how beautiful she is. Brent definitely wasn’t shy in expressing his opinion. Even though Katherine hasn’t spoken out against his actions, many people have, and AJ probably isn’t too cool with it either.

During Monday’s broadcast of the BCS Championship game between the Alabama Crimson Tide and the Notre Dame Fightin’ Irish (my fave), ESPN’s broadcaster, Brent Musburger was talking about the crowd.  Of course one lucky lady caught his eye.  That was Alabama quarterback A.J. McCarron’s girlfriend and current Miss Alabama USA.  Musburger made a couple of comments about her, basically saying she was beautiful.  Big deal?  I wouldn’t think so, but ESPN felt the need to release an apology for Musburger’s comments.  Dumb.

Here we are three days later and Miss Alabama USA is now Miss Popularity USA.  In the course of one evening, Katherine’s Twitter followers went from a few hundred to over one hundred thousand.  So she was already dating the hot quarterback, now add fame onto that pile and she’s one lucky girl. BUT, Wednesday, Katherine turned down several media appearances.  What kind of beauty queen turns down the media spotlight?  One with a controlling boyfriend perhaps?

TMZ reported that Katherine cancelled her appearances because her QB boyfriend, A.J., told her to.  Is the green eyed monster rearing it’s ugly little head? Could the start QB be JEALOUS?  Dun, dun, dun.  Apparently Alabama’s BCS win was lost in the media as his girlfriend was stealing the spotlight.  A.J. didn’t like that.  All of his hard work went unrecognized as his mate shot to fame.  His jealousy and annoyance is clear in his tweets.  As pro-NFL player Darnell Dockett sent his phone number to Webb over Twitter, McCarron responded with “#betterkeepdreaming like the rest of these dudes.”

Did A.J. get so angry and jealous that he made Katherine cancel all future appearances?  It would appear so.  Not a very healthy relationship, Katherine.  She he did respond directly to TMZ and confirmed that she did in fact cancel eight upcoming appearances; however, she was quick to deny that A.J. was behind it.  “My decision to cancel the interviews was not made at A.J.’s request… I want it to be about me and him,” Webb stated.

What do you think readers?  Did Miss Alabama USA pull the plug on her appearances on her own or was she forced to remove herself from the spotlight? What do you think of the Brent Musburger Katherine Webb comments, which started this whole thing?