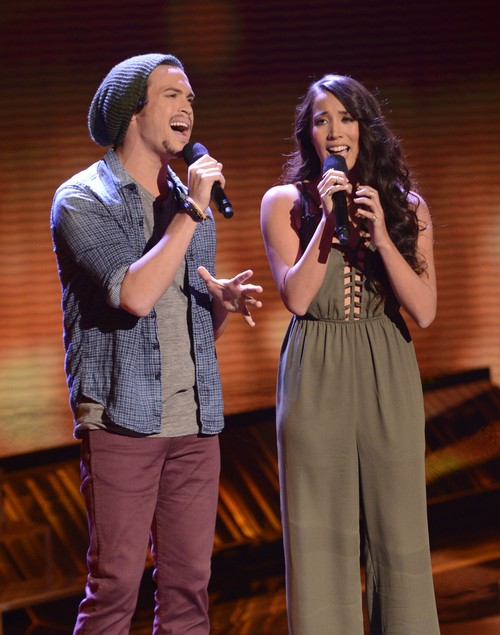 Alex & Sierra took the stage tonight on THE X FACTOR USA for the live performance show. Alex & Sierra sang “Addicted to Love” by Robert Palmer.  Alex & Sierra are on Simon Cowell’s Group team and they decided to sing this song for their 1980s song choice. On tonight’s show the top 12 performed live in front of coaches Simon Cowell, Kelly Rowland, Demi Lovato and Paulina Rubio for America’s vote and to make it another week. Did you watch tonight’s performance show? We did and we recapped it here for you.

Judges comments:  Kelly said, “I love watching you as a couple.  It was a little weird, but once you got together it was magnetic.”  Paulina said, “I love you guys!”  Demi said, “I like you two together, it was a bit uncomfortable.  I don’t know how you are walking in those shoes.”  Simon said, “We actually don’t want to do the same thing week after week.  This was not as good as it should have been because you lost your melody.”

Because of a computer glitch the artists were required to perform twice last week.  For Alex & Sierra’s “save me” song they sang “Give Me Love.”  Simon said about their song, “he loved the song choice and loved their chemistry; Simon believes that they will now on be choosing all of their own songs.”  If you want to see Alex & Sierra make it another week, you have to vote for them.