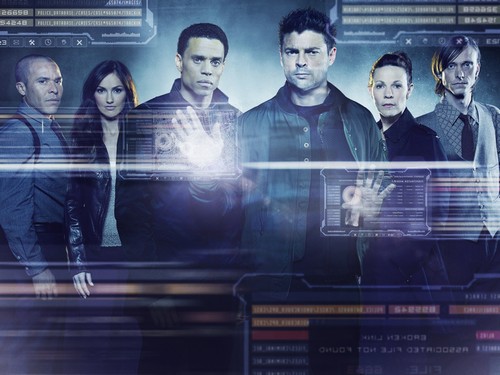 Tonight on FOX their new action-packed police procedural, ALMOST HUMAN set 35 years in the future premieres with their, “Pilot” episode.  The new show set in the year 2048, the series follows the week-to-week missions of a detective and his robot partner as this buddy-cop duo solves cases and fights to keep the lid on dangerously evolved criminals in this futuristic landscape.

On tonight’s show 35 years in the future, ALMOST HUMAN thrusts us knee-deep in a dystopian future where the crime rate has ballooned 400%, and the police force now requires every police officer be joined in the field by an android companion. After a disastrous ambush masterminded by a clandestine criminal organization, officer John Kennex is left near-death. Two years later, he’s back, and trying to take on the worst that a futuristic Los Angeles has to offer.

Tonight’s Almost Human Season 1 pilot is going to be exciting, and you won’t want to miss. So be sure to tune in for our live coverage of Almost Human — tonight at 8PM EST! While you wait for our recap, hit the comments and let us know how excited about the premiere of Almost Human.  Check out a sneak peek of tonight’s episode below!

The premiere of Almost Human opens in the year 2048. “Science and technology evolve at an uncontrollable pace. Unknown drugs and weapons flood our streets and school. The contraband is controlled and distributed by violent, faceless, criminal organizations. Crime is rising at 400%. Outnumbered and overwhelmed, law enforcement implements a new strategy: every police officer is partnered with an advanced, combat-model Android.”

Police officers are engaged in a shootout, when one of the officers are hit it is obvious he is not human. Wires are protruding from his bullet wound. One of the cops are injured, he is human. His human partner tries to get him out of the building, the Android cop advises it against it, it is too dangerous. The cop is hit with a grenade, and his leg is blown off.

John, the man who lost his leg, awakes in some sort of contraption with monitors hooked up to his bead. A Doctor is asking him what he remembers, and reveals that he was in a coma for seventeen months. The Doctor also reveals that he is undergoing some sort of procedure to bring his memory back, because he is trying to remember who killed his team. Unfortunately after the treatment he still can’t remember who killed his team, but he did have a flashback of his ex-girlfriend Anna.

John has left the Doctor and is getting into his car. An Android pulls up to his car and asks him is he is okay (you can tell which cops are Androids because they have a number on the back of their shirt instead of the word “Police”).

John is in his apartment playing old video messages from his ex-girlfriend Anna, they are over two years old. He receives a video call from his boss, she wants to know if he is coming back to work today. They need him back. The camera pans down and we see that John now has a fake leg.

John returns to work. Some of his coworkers are less than thrilled to see him back. Richard, another cop, blames him for getting his entire team killed in the ambush we saw at the beginning of the show. John receives his new Android partner. He tells his boss he doesn’t want an Android partner, he wants a human. His boss tells him he doesn’t have a choice. She also tells him that she is just as interested in finding out how “Syndicate” found out about the raid and ambushed him. She gives him a lead on a recent Syndicate robbery.

John heads to the robbery scene, where Syndicate stole programmable DNA from a truck. Valerie, another detective is concerned about him, because he is acting strangely. John keeps having flashbacks of his last ambush.

When John gets back in his car with his Android partner, the Droid questions him about why he spaced out (during his flashback), the Androids can sense medical conditions in a human. The Droid says he is going to have to report John’s medical to their boss. John tells him there is nothing to report. Once they start driving, the Droid questions him about why he was in a seedy part of town last night, which is notorious for Black Market medical services (the Doctor trying to help him get his memory back is not legal). John opens the door and pushes his Android partner out into oncoming traffic. He is destroyed.

John pays a scientist, Rudy, a visit. He tells Rudy that his Android was faulty, and fell out of his moving car. The scientist unveils a lifeless Droid, and prepares to bring him to life. The Droid’s name is Dorian. John is concerned because that Android is “crazy.” Rudy reveals that Dorian is a special kind of Droid, he was made to be more like humans than the others, and he has human-like emotions. They bring Dorian to life, and he leaves with John.

Dorian wants to have a heart to heart with John while they are riding in the car. He wants to know who “A” is, he sees an engraved keychain hanging from the rear-view mirror. John tells his he wants him to be quiet. Dorian’s feelings are hurt.

Meanwhile, the Syndicate is conducting another heist (the men are wearing the trademark creepy Syndicate masks).

John returns to the office with his new Droid, Dorian. His coworkers are less than thrilled that he brought back a “crazy Droid.” John finds out that the Syndicate has kidnapped another human cop.

John heads in to interrogate the one member of the Syndicate they have in custody. Dorian doesn’t like the way he is interrogating the guy, he thinks he is being too rough. Dorian takes a kinder approach, and manages to get an address from him, where the kidnapped cop is being held.

The Syndicate member the police has in custody, says he has to use the bathroom. He throws up an electronic device and sticks it to the toilet.

John and Dorian arrive at the address the man in custody gave them. The building is rigged with a trip wire, they follow the wire to see what it leads to. They find the detective locked in a bulletproof box, which is welded shit. John realizes they have been set up, he calls the precinct and tells the cops that are transporting the Syndicate member to the safe house that it is all a set up. He is too late though, as he calls the cops they are being ambushed.

A timer goes off and a chemical gas is blown into the glass box. The detective locked inside dies within seconds.

John tells Dorian to send a sample of the dead cop’s blood to Rudy to see what chemical was used to kill him. Dorian stabs a needle into the dead cop and draws his blood, then shoots it into his own neck.

Rudy calls John and reveals that the programmable DNA was used to kill the cop in the glass box. Every cop is injected with a chemical to protect them against chemical warfare, and the Syndicate is using programmable DNA to attack that chemical.

John pays his illegal Chinese Doctor a visit, he wants to remember more about the ambush two years ago so he can figure out who the Syndicate is and stop them. The Doctor hooks him up to the chair that delivers electric shocks to help him remember more, the chair is killing him though, it is too dangerous. Dorian comes in and stops the machine, saving his life. He was able to remember the face of a woman that was at the ambush. His ex-girlfriend Anna, is in charge of the Syndicate. When John came out of his coma Anna had disappeared, it is obvious that their relationship was fake and she was just using him.

John shares the new information with Dorian, and thanks him for saving his life. John takes Dorian to the kidnapped/dead cops’ destroyed Droid. He wants him to upload the destroyed Droid’s memory and see what happened before they destroyed him. They find out that the Syndicate wants something from the police evidence room.

The Syndicate is making their move, they are attacking the police station. The electronic device that the Syndicate member stuck to the toilet is activated, it takes out all of the Droids, and they begin dropping. The electronic device has no effect on Dorian though. The precinct is under attack, a shootout ensues. They are spraying the cops that get in their way with the same gas that killed the cop in the glass box. They are able to take one of the Syndicate members into custody.

Rudy has to come to the police station and reactivate all of the Droids. John is still replaying his video messages from Anna, obviously trying to understand why she betrayed him. His boss, Sandra approaches him, and he asks her why she told Rudy to give him Dorian and not a normal Droid. Sandra says Dorian is special, just like him.