BY Robyn Good on May 6, 2013 | Comments: Leave Comments
Related : Dancing With the stars, Dancing With The Stars Season 16, Reality TV, Recap, Television 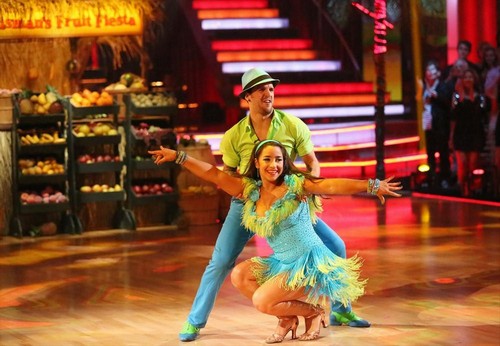 ALY RAISMAN danced a ARGENTINE TANGO on the eighth episode of DANCING WITH THE STARS: 2013 performance show tonight. On this week’s show the six remaining couples took to the dance floor and for the first time this season, each couple had to perform two routines in an effort to impress the judges and earn America’s votes.  If you missed the show, we recapped tonight’s show for you and if you want to see how all the couples did go HERE!

Judges comments:  Carrie Ann: “How do you feel after dancing that.  I was just going to say the transformation I have seen you is incredible.  Your lifts were a little strange moments.”  Len: “It had mood, it had atmosphere, this is about a guy dancing with his mistress.  It was smooth and seductive.  Terrific!”  Bruno: “I had to idea you could be so good at being bad.  You have become such a good actress.  The lifts were sensational!”