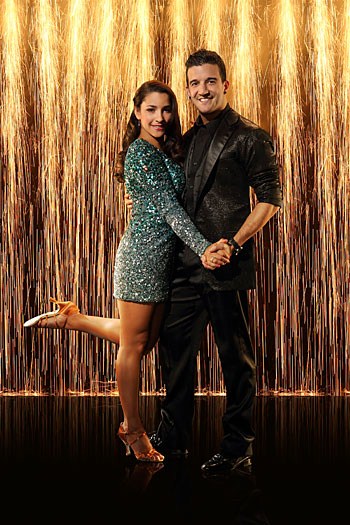 Aly Raisman danced a Cha Cha Cha, on the premiere of Dancing with the Stars: 2013 performance show tonight.   DWTS is back with an all-new cast of fresh faces hitting the dance floor. This season features two new dance styles, contemporary and jazz; three new professional dance partners — Lindsay Arnold, Sharna Burgess & Gleb Savchenko; and notable theme shows.  If you missed the show, we recapped tonight’s show for you and if you want to see how all the couples did go HERE!

Aly Raisman and professional dancer Mark Ballas dancing a Cha Cha Cha.  Aly admitted she is having some trouble in rehearsals. “I have some gymnastics habits that are a little tough [to break]”

Judges’ Comments: Len: “He loved the vitality that she brought to the dance, but good job.”  Bruno: “Very surprising and inspiring. He was impressed.”  Carrie Ann: “She has potential, but she’s a little safe.”