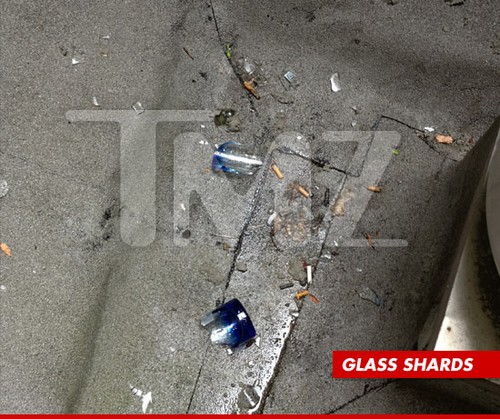 Earlier today, TMZ posted a photo of whatever it was that Amanda Bynes chucked out of her 36th floor window. Amanda said that she doesn’t do drugs because she’s “allergic” and that the bong was actually a vase. We were curious why she would chuck a vase out of window with the cops present, but have yet to receive a response.

As you can see from the photo above, it could either be a vase or a bong. Without actually seeing the shattered glass in person, it’s really hard to tell what it is. Are there pieces consistent with the glass being a bong? Is there marijuana residue on the glassware? If so, does it contain Amanda’s fingerprints? Surely she could be tested for marijuana use, it hasn’t been the requisite thirty days, no?

Still, she has announced on her favorite social networking website that she plans on suing TMZ. Are we next? She tweeted:

I’m suing Tmz for staging fake bong photos. It’s not even a bong! The photo shows it’s clearly a clear and blue stained glass Ciroc bottle from some random street. You can’t create fake evidence long they released me after they searched my apartment and the street and found no proof of drug use or drug paraphanilia inside or outside my apartment.

They’re a lame excuse for a news source. They’re criminals and should be arrested! I was treated like an animal by the cops and I will do anything to receive justice. Tmz are liars and criminals for creating false evidence! My lawyer is sending a lawsuit to their office.

You just got to love the crazy, don’t you? Will it ever end? Hit the comments and let us know your thoughts!