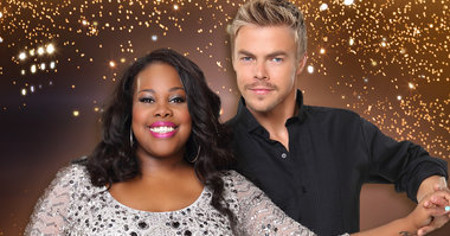 Amber Riley is best known as Mercedes Jones from Fox’s hit musical television show Glee, which introduced her to a global audience. According to her bio, “She got her first big break when Ryan Murphy cast her in the pilot St. Sass. Although the pilot was not picked up to series, she was able to use that experience to land a role on the television series Cedric the Entertainer Presents.

Amber has performed in numerous theater productions, including Alice in Wonderland, A Midsummer Night’s Dream, Into the Woods and Mystery on the Docks with the Los Angeles Opera. In November 2012, she made her New York stage debut to rave reviews in New York City Center’s Duke Ellington’s Cotton Club Parade.”

But despite all her other work, Amber definitely broke into the mainstream media with her performance in Glee, which netted her two NAACP Image awards for Best Supporting Actress in a Comedy series, as well as a Teen Choice nomination for Female Scene Stealer: TV. Amber is also hard at work on her debut solo music album.

Amber’s partner on Dancing with the Stars will be the famous Derek Hough, who’s one of the most famous professional dancers from the show. Brother to actress Julianne Hough, Derek and his sister share the same charming good looks, and he’s also got a lot more professional dancing credentials than most of the other dancers on the show.

Will you guys be rooting for Amber and Derek, or another couple? Let us know in the comments. For more DWTS news and contestant meet ups, CLICK HERE!