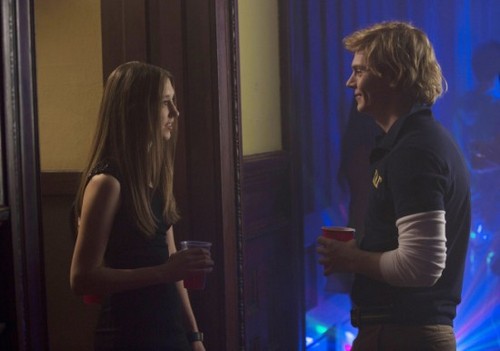 On last night’s season premiere of AMERICAN HORROR STORY the episode opens and we are in New Orleans in 1934 at a party hosted by Madame Marie LaLaurie (Kathy Bates). She is in the process of covering her face in blood because she thinks it will keep her from aging. (Bates never disappoints when it comes to playing psycho….Misery anyone? No…that’s cool because she has plenty to go around). LaLaurie’s butler comes in to inform her there is a problem at her dinner party. Apparently one of her daughters thought it would be a brilliant idea to get it on with one of her mother’s slaves. She is not having it and she grabs him and hauls him down to her torture chamber and what a chamber it is. There are several slaves in it all in varying degrees of mutilation, torture and death. She chains him up and creates the Minotaur we see from the previews. (Keep in mind Kathy Bates character is based on a actual woman who did in fact torture, mutilate and kill her slaves, which makes this all the more disturbing).

Zoe (Tessa Farmiga) and her boyfriend are in a house and go into a bedroom. They are planning on having sex for the first time. They start making out and touching each other when he all of a sudden he starts bleeding from anywhere and everywhere he also begins to violently shake.

The doctors say he died from a brain aneurysm but in reality Zoe killed him (she can literally use sex as a weapon). Her mother explains to her that she has a rare genetic disorder and that she is a witch. Zoe is being sent to a school in New Orleans where they will be able to help her. Cue Myrtle Snow (Frances Conroy) who is there to pick her up and take her to New Orleans. Myrtle tells Zoe’s mother that Zoe is their daughter now.

The School is a old school southern mansion beautiful in all it’s gothic glory. Zoe goes in and it is all white on the inside as well. Zoe is looking at the portraits hanging on the wall when three people in bird mask jump out and pin her to a table. They hold her down and right before they stab her they jump off of her and take of their bird mask and laugh.

The girls are Queenie (Gabourey Sidibe) she is the equivalent of a human voo doo doll which is quite fitting for New Orleans, Madison (Emma Roberts) she is the Carrie (so help me she better be more believable as a witch on a tv show then she was a killer in a movie or I am gonna be so pissed), and Nan (Jamie Brewer from season one of AHS) she is a clairvoyant.

We meet Headmistress Cordelia next (Sarah Paulson). Cordelia tells Zoe some of the history about the School and how it was founded to hide and protect the younger witches. Cordelia also explains that witches are a dying breed because families that carried the gene stopped having children (secret circle this is not). Cordelia then tells her about the Supreme witch who embodies every power a witch can have ( just from the description I can tell this will be Jessica Lange’s character).

Misty Day (Lily Rabe) is a witch who could bring things back to life and wasn’t found in time and was burned to death. (She will be back, she is a series regular).

A car pulls up to the school and someone gets out with a umbrella.

Fiona (Jessica Lange) is multitasking by listening to the news and snorting coke at the same time. A doctor walks in and she is really really pissed at him. Apparently he is supposed to be finding a way for her to have eternal youth. The doctor has given her a injection once a day for five days and sadly she still looks her age. The doctor tells her he is done and goes to leave. Fiona thinks not and uses her power to smack him up against the wall and then drains him of hIs soul. You see for a brief moment when she looks in the mirror she does look younger but then it fades.

We find out that Cordelia is Fiona’s daughter and that Fiona is in fact the Supreme (I so called it). Fiona also tells her daughter that she is there to stay and will be taking over the teaching duties of the girls.

It’s now night and we are on a party bus with some frat boys and we see Kyle (Evan Peters). Kyle gives the rest of the frat boys a speech about staying out of trouble and not drinking, then they all get out and head inside. Zoe and Madison also happen to be at the party. Madison is whisked away by a girl who knows her. Zoe is left alone looking extremely out of place. Kyle sees her from across the room at the exact same moment she sees him, they are drawn to each other. ( we finally have our Romeo and Juliette from season one back). They look at each other through a ice sculpture and smile. Zoe then walks away, shortly after Kyle shows up with a drink for her and they start to talk.

Madison is heading back downstairs when she stops on the stairs and pulls out her cigarettes. One of the frat boys (the guy from the secret circle and twisted) offers her a light. Madison tells him to get her a drink which he then spikes so that she will end up way out of it and can’t stop him or the other frat boys from gang raping her and recording it on their phones.

After Zoe unsuccessfully looks for Madison Kyle offers to check upstairs. Kyle comes upon the frat boys and their dirty deed and immediately goes off on them. They knock him down and run out of the room and unto the party bus, Kyle gets up and follows them. Zoe meanwhile tries to help Madison, she covers her up and then she also takes off outside. Kyle again gets hit and this time is knocked out. The boys take off in the bus and Zoe goes running after it. Madison shows up behind her and with a flick of her wrist she causes the bus to crash and explode into flames.

The next morning the girls are watching it on the news when Madison walks in and flips the tv off. Zoe tells her that they need to tell someone what happened when in walks Fiona who delivers the best line of the night. “What are we talking about? College boys taken in the prime of their lives. Such a tragedy almost makes you want to cry doesn’t it? But then the world isn’t going to miss a bunch of assholes in Ed Hardy t-shirts.” (cold as ice..lol).

Madison wants to know who she is. Fiona knows Madison is the one that caused the wreck. Madison tells her to go to hell. Fiona answers by slamming her into the wall. Fiona then tells them they are never going to become good witches sitting around Hogwarts. Fiona takes them out for a little field trip.

Nan gets distracted when they pass by LaLaurie’s and she goes in. Fiona and the other girls follow. They go on the tour and hear the story of what a horrible evil woman she was and we see a flashback where we are introduced to Marie Laveau (Angela Bassett) who convinces LaLaurie to take a elixir that will promise her husbands fidelity. LaLaurie guzzles it down and seems to become paralyzed within minutes. Marie was seeking revenge for what LaLaurie had done to her lover (the Minotaur).

The woman giving the tour says that nobody knows the final resting place of LaLaurie, that is until now because Nan know’s exactly where she is and tells Fiona.

Madison heads over to the hospital and is looking for Kyle. She instead finds the ring leader of Madison’s rape. She goes up to his bed and tells him he is the one that should be dead.

Fiona has her luggage moved in and tells the moving men to be sure and stack it vertically? Fiona leaves and tells her daughter she is going out and not to wait up.

Zoe is leaving flowers at the makeshift memorial for Kyle and the rest of the boys.

Madison is in the shower crying.

Queenie is stealing chicken from the refrigerator.

Back at the hospital Zoe closes the curtain next to the guys bed and closes the window. She gets him hard then she hops on top and f**ks his brains out (literally).

Fiona has to guys dig up LaLaurie’s coffin at her house and then makes them forget that they were there. Fiona picks up the cutters,snips the chain and the coffin falls apart. Laying inside is a very much alive LaLaurie. Fiona clips the chains on her hands with the cutters. LaLaurie stands up and removes the gag from her mouth. Fiona tells her to come on and she will buy her a drink.

If you cannot wait till next week, check out a sneak peek of American Horror Story Season 3 Episode 2 below.