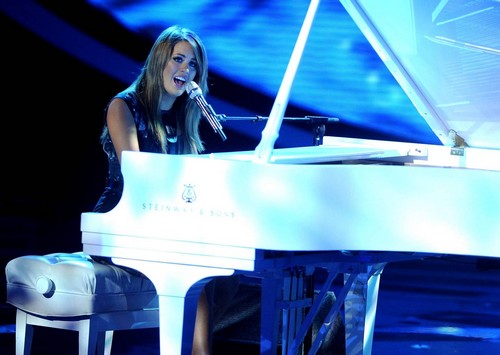 Last night AMERICAN IDOL exploded again with talent! The final 4 ladies battled it out for America’s vote and they really bought it tonight. Each of the competitors sang two songs each last night: the first choice was a “One Hit Wonders” song and the second song was from the “AT & T Fan Pick.”  Did you watch last night’s show? We did and we recapped it here for you!

On last night’s show Angie Miller was the one to beatlast night, she had two stellar performances.   She impressed the judges and Randy declared her the winner of the evening.  For her rendition of “Who You Are” by Jessie J.,  [VIDEO HERE] Mariah said, “She’s standing up in spirit. The caliber of the performance was “beyond”. It was stunning and amazing. Songwriting can give her a career with longevity. Sing an original song at the piano and be inspiring!”  For her rendition of “Cry Me A River” by Julie London [VIDEO HERE] Randy said, “it was the best of the night. Angie wins the night, hands down. She’s in it to win it.”

Candice Glover had one so/so performance and one great performance.  For her rendition of “Find Your Love” by Drake [VIDEO HERE] Randy said, “The vocals are the easy part. She’s that church girl and has an amazing instrument. Every phrase doesn’t need a run and can’t always sound like she’s in church.”  With her rendition of Samantha Sang’s song “Emotion,”  [VIDEO HERE] Nicki said, “she was grooving to the song and it didn’t feel like it was 50 years ago. She’s a superhero and she’s proud of her.”

Kree Harrison took the stage tonight and sang her two songs, the judges were not pleased with her first song, but felt she redeemed herself with her second song.  For her rendition of “Hurts So Bad” by Little Anthony & The Imperials [VIDEO HERE] Nicki said, “That performance is not going to give her what she needs to get that seat for next week. That was not a top four worthy performance.”  For her second song Kree sang singing “Whiter Shade Of Pale” by Procol Harum. [VIDEO HERE] Randy said, “Singing will never be her problem and she redeemed herself. She sang her face off.”

Amber Holcomb was first up tonight and the judges loved both her performances and thought she had grown.  For her rendition of “The Power Of Love” by Celine Dion, [VIDEO HERE] Randy said, “She looks like a black and white cookie. She has the most growth throughout the entire contest.”  For her second song Amber sang “MacArthur Park” by Richard Harris [VIDEO HERE] and Randy said, “She is in it to win it. She’s hitting those crystal clear high notes is crazy. She looks amazing and she’s current.”