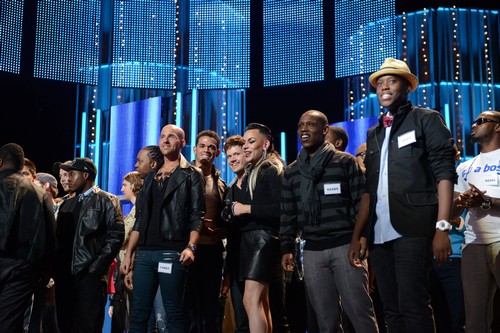 Tonight  AMERICAN IDOL is back and it is Hollywood Week!  There will be tears, drama, broken dreams and triumphs.  The usual craziness and madness of American Idol that we expect from idol.  It does not matter whether auditioners received a unanimous “yes” from our judges Mariah Carey, Randy Jackson, Nicki Minaj and Keith Urban or had the judges battling over their fates, it’s a clean slate in Hollywood.  It is anyone’s competition at this point.

On last week’s show we saw the last of the audition round as the judges headed to Oklahoma City where they continued their search for the next American Idol.  44 people earned the covenant golden ticket and they were headed to Hollywood.  Wait at the end of the audition here was one more audition his/her name was Pepper.   The judges soon realized it was Steven Tyler dressed like a lady.  HE just wanted to come by and say hello.  Very cute.  If you missed the episode you can catch a full and detailed recap HERE.

On tonight’s show Hollywood Rounds begin with the guys’ performances.   It’s a clean slate in Hollywood for the lucky contestants who are one step closer to becoming the next AMERICAN IDOL. For the first time in the “Hollywood Rounds,” it’s guys vs. guys and girls vs. girls, as they compete for a spot in the coveted Top 40 Semifinalists.

Stay tuned to tonight for a full live recap of tonight’s episode. We will keep you up to date on all American Idol news, reviews and spoilers and make sure to check back here regularly for more information on your favorite television shows!  So don’t forget to come back to this spot at 8:00 PM for a live recap of American Idol to see the “Hollywood Week Men″ – recap at 8:00 PM EST!