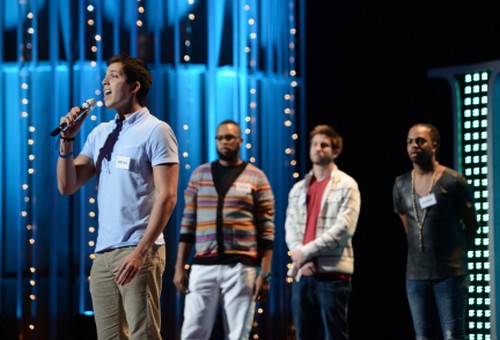 Tonight AMERICAN IDOL is back and Hollywood Week continues with a second week! Last night there was the usual tears, drama, broken dreams and triumphs.  It does not matter whether auditioners received a unanimous “yes” from our judges Mariah Carey, Randy Jackson, Nicki Minaj and Keith Urban it’s a clean slate in Hollywood. It is anyone’s competition at this point.  Did you watch last night’s beginning of the Hollywood Round?  We did and we recapped it HERE.

On next week’s show the girls get their chance to win over the judges.  Once the ladies finish next week only 40 contestants, 20 men and 20 women will move on to the semi-finals.

Stay tuned to tonight for a full live recap of tonight’s episode. We will keep you up to date on all American Idol news, reviews and spoilers and make sure to check back here regularly for more information on your favorite television shows!  So don’t forget to come back to this spot at 8:00 PM for a live recap of American Idol to see the “Hollywood Week Men – Part 2″ – recap at 8:00 PM EST!

Tonight the men continue with the competition, last night was group night and tonight is solo night.  After tonight 43 of the remaining contestants will be cut.  The contestants had a list of songs they could choose from and had the option to play their own instruments.

Paul  Jolley is up first and his confidence seems to be shattered.  He tells the judges how nervous he is.  Judges comments: Nikki thought he walked out defeated and it irritated her and it was a total turn off for her.  She tells him to be jolly and she wishes he could have been professional.

Lazara Arbos was up next and he was fantastic.  They did not show much of her performance.

Curtis Finch Jr. and his goal is to touch the hearts of people.  He was really good and Mariah tells him he was absolutely fabulous.

Group 1: The judges are now deliberating on group 1.  The judges will give their decisions after each 8 contestants.  The contestants moving ahead are Lazara Arbos, Curtis Finch Jr. and Paul Jolley.

Devin Valez – wow this guy is good!  He is singing “What A Wonderful World” by Louis Armstrong.  Keith tells him he is born to sing, it was what he was born to do.

Gurpreet Singh Sarin singing, “Georgia On My Mind”  and playing his tuitar.  The judges loved him.

Matheus Fernandez singing “Stronger” by Kelly Clarkson. Mariah tells him he has come a long way and he appreciates him and knows he is a good person.  Nikki cuts in and tells him he mentions his height too much and he is getting a pity party.  She advices him not to mention his height again.

Nicholas Mathis he has so many emotions going on cause he is chasing his dream.  Keith felt like he was chasing the song and not the song.

Papa Peachez – Nikki is not thrilled about his song choice and mumbles to Keith, she does not know why he chose this song.  She tries to remind him what she told him yesterday, that he has to step up.  She tells him she is so disappointed to him.  She thinks the competition has sucked things out of him.

Jimmy Smith – The judges were not pleased about his yesterday’s performance.  Mariah tells him he has been on of her favorites and he wowed her.  She tells them they have a group and sometimes they don’t agree.

Group 3: Nikki tells them this was the one time to fight for their lives.  Gosh Nikki is a biatchy tonight!   Jimmy Smith, Johnny Keyser, Vincent Powell are moving ahead.

Nick Boddington who has a beautiful voice is up and he is playing the keyboard at the same time.  The judges clap for him.  Keith tells him he range was fabulous and he nailed it, he really liked his performance.

Charlie Askew he chose his song because there was a girl, there always is and they dated for two years and he still loves her.  The judges loved him.  Nikki tells him she is obsessed with him.  She tells him today he became an artist in his eyes.  He has this quirky thing that is so right.  She loves him!

Group 4:  Mariah tells them it was hard to decide.  Nick Boddington, Joshua “Josh” Jada Davila, Mathenee Treco, Charlie Askew are moving on to the semifinals.

Micah Johnson – Mariah says she likes it when he could do more with his voice but she already loves him.  The judges tell him that it was a NO for today.

All the contestants who made it through are called back on stage and the contestants don’t know what to expect.  Randy congratulates the men.  He tells them next week they are going to see the girls and next Thursday 20 of them will say and 8 more will be cut.