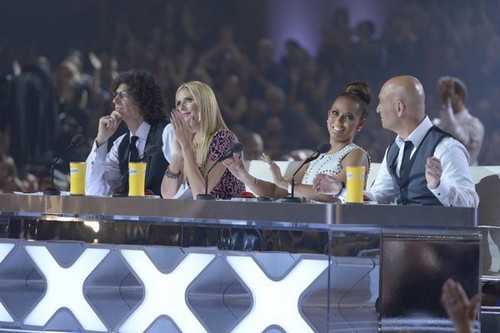 Tonight on NBC their hit reality talent show AMERICA’S GOT TALENT continues and we are down to the top 24 and twelve semi-finalists will perform in the hopes of headlining their own show in Las Vegas and walking away with a million dollars. Did you watch last night’s episode? We did and we recapped it here for you.

On tonight’s show the first 12 semi-finalists perform live at the legendary Radio City Music Hall for the chance to win one million dollars and become the most talented act in America. Six of those acts will move on to the Top 12.

Tomorrow night Cassadee Pope, the season 3 winner of The Voice, will perform on America’s Got Talent next tomorrow.  She will be taking the stage after One Direction.

REC AP: One of the acts had an injury in rehearsal; the Kristef Brothers did a stunt where one of them fell 8 feet and hit his head on the stage. So, they will not be performing tonight.

Taking their place is the judges wild card picks; Howie brought back Red Panda and believed she was a phenomenal act and many of the fans on Twitter wanted her. She had a family emergency and wasn’t allowed to be in the tryouts for the semi-finals.

The first act up is Tone The Chiefrokka, they have their one hit wonder; B Double O T Y. Mel B used her wild card to bring him back and now they are going to give a great performance.

Mel B says that she it was an amazing way to kick off the semi-finals; she loved it. Howard Stern gave them an X and says that he was bored out of his skull; it was fun once or twice but it’s not a great song in his opinion. He believes that Cheifrokka would be amazing on a sitcom one day, but just doesn’t like the song. How says that it is a hit, it’s as good as Gangnam Style; he loved the church thing in the beginning. Heidi says she likes the booty song but it wasn’t her most favorite version of the song; she was hoping for a more gospel feel to the song.

Next performing is Howie’s wild card pick and it’s Red Panda; she is excited to be in New York but is nervous because she has gotten such very little time to practice. She cries walking in to the hall because he is so happy to be there.

Howie says that he believed that he did the right thing, she had to be given the chance; she had like no time and even though she did have a bowl break he felt it was good for what time she had and she deserved to be there. Howard says that he’s happy about her being back and loved her act; he believes singers have it way too easy but what Red Panda does is just insane. She did make a mistake but wanted to see it over and over again; he believes what she does is entertaining. Heidi says she really likes her and knows she can do the act, but just now there was a little slip up. Mel B says well done for not falling off but she felt like she has seen it before; she felt nervous but she wasn’t all that excited about it.

Performing on stage next is Angela Hoover, she wants to keep moving on she wants to get much better and has been performing every night and is ready to give it her all.

Next up is Heidi’s wild card pick and it is Duo Resonance; they felt really upset when they were not chosen but glad to have been picked up by Heidi.They believe they’ll be perfect on stage.  The judges loved them.

Next up on the stage is magician Collins Key he finds it weird he has gone from a normal kid to be recognized everywhere.  Howard would love to see him win and hopes he has a game plan.  Collin has been practicing non stop.

Mel B is so confused, she wants to believe in magic but on the other half she doesn’t think it can be real. She doesn’t know what’s going on, wondering how he did it. Howie says he loved it, he said it was a good trick. Howard said he didn’t love it all, he didn’t believe that it was not good at all. Heidi says that he’s a good performer and loved how he involved the whole audience and can’t figure it out.

The next act up is Innovative Force, and they are getting a lot of support from their home town; they even got an ice cream name after them. They have moves planned that they only learned a week ago but are ready to give it their all.

Howie said that he thinks what they do is amazing, but it looked a little bit like a cheer leading competition; he thinks that there is so much to come and did not blow him away. Howard said that they are an inspiration and loves seeing them do this kind of stuff; he believes the problem is that people may not understand how dangerous it is what they do. Heidi says that she loved it, she thinks it’s the best act of the night so far. Mel B says that she is a fan but felt it was a little bit messy; she just felt some of the timings off with the music.

Next up is singer Dave Fenley and he is shocked to have made it into the semi-finals and loves how his parents support him so much.

Mel B says that it was such a great song, she loves his rendition of it and how he made it his own; she would even buy the song. Howard says that it was train wreck and it was awful; he believes that he’s a more emotional singer and that the song wasn’t that great. Heidi said that she liked how it was just him on the stage with his guitar and loves his voice. Howie disagreed with Howard and called it the best act of the night; he loved the originality and loved how he was dressed.

The awkward comedian Taylor Williamson is up next, he can’t believe people voted for him and that he’s liked. He’s a little sad Heidi hated him, but he has made his comedy for children this week.

Heidi says that her favorite part was when he started flirting with her and laughed at her; she did laugh this time and enjoyed him. She also says that she really likes how awkward he is. Mel B says that he’s completely inappropriate and loved it. Howie says that he’s brilliantly funny and is the new best act of the night; he wants him to be voted through. Howard says that he did the impossible and walked the fine line of comedy on network television; which impressed him a lot.

Next up is singer Jonathon Allen; he looked back to his first audition and believed he was really nervous and felt that moving on to the semi-finals made him so happy. He loves being excepted for who he is; he’s picking up his game for tonight.

Mel B says that she’s interested to seeing a different side of his voice, it was very soft and delicate. Howie says that he went way out of his comfort zone and didn’t hit it. Howard says that it wasn’t his night, he really wanted him to step up much more. Heidi says they are all wrong, she loved him and hopes America votes for him.

Next up is Catapult Entertainment that just amazed the judges last week, they’ve all made sacrifices and are ready to show off something more complex in telling a story.

Heidi said she liked it and loves how they take her on a magical journey. Mel B says that she liked but didn’t love it, she only started enjoying it half way through and felt very confused near the beginning. Howie says he doesn’t disagree with Mel, the last story was more precise but this one left him a litte confused. Howard says that he was also confused and expected a really bigger story; he does hope for America to vote for them.

Up next is Cami Bradley, Ameirca’s Got Talent proved to her that she has a lot of talent and is ready to show it to the world.

Mel B says that she thinks that Cami has an amazing voice but tonight she felt the whole thing a little bit boring; she wanted something more full on. Heidi says that it takes a lot of courage to take such an iconic Elvis song and remix it; she felt it was a song she never heard before. Howard says he can’t help falling in love with her and believes that Mel is wrong; he thinks she did a good job. Howie says that he loves her and believes America is in love with her; he believes that she has to be seen again.

The last act tonight is Forte the opera group of member who really don’t know each other, they are very different men but share the same love for opera.

Heidi says wow and nothing else. Mel B says that she has changed her mind; she really bloody liked them. Howie says they solidified a place for themselves in the quarter-finals and believes they sent Jonathon Allen home. Howard says that from the opening notes they had him, the pressure of the semi-finals got to everyone but not them; they moved the audience perfectly.