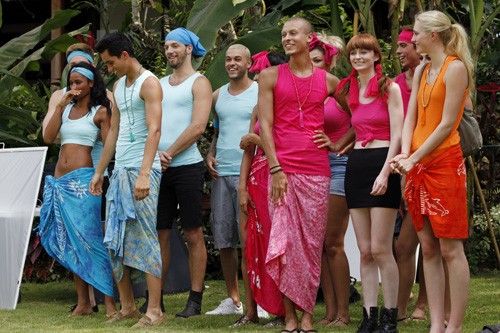 TGIF CDLers! Tonight on the CW Tyra Bank’s reality show AMERICA’S NEXT TOP MODEL returns with a new episode called, “Finale Part 1”  On tonight’s show in part 1 of 2 part finale the finalists shoot their guess campaign.  Did you watch last week’s episode? We did and we recapped it right here for you.

On last week’s show the THE FINAL THREE WERE CHOSEN — A workout challenge brought out the competitive side of the guys. Later, the guys and girls had to pose while hanging upside down with bats, and one of the models struggled to take a good photo.  The models who went home were Renee and Chris.

On tonight’s show the finale begins with past contestants returning to assist the final three models, Marvin, Jourdin and Cory. The photo shoot is for Guess. Later, the eliminated models are put to the test when they are offered a cash prize.

It’s down to the final three contestants for America’s next top model. Two guys and one girl. Marvin, Corey, and Jourdan. As the final three Tyra Banks assigned them all colors to express themselves. Jourdan is orange, Corey is fuchsia, and Marvin is blue. At first these colors don’t appear to hold any significance but that will all become clear a little bit later.

As for now the trio is just happy they made it. Jourdan won her fifth photo shoot last week. So of course she’s on high. While Marvin, sadly, is missing his semi-girlfriend Renee. Because of the public setting all he could do was give her a hug goodbye which didn’t really show her how important she was to him. Then there is the greatest news of all. Chris H. is gone. He was annoying and he brought a bad atmosphere wherever he went.

Surprisingly things are moving along much quicker than they thought. The contestants have to prepare themselves for the Guess photo-shoot. When they get there they find they have a cheering section filled with old contestant. Technically only some of them have that cheering section. A lot of their former friends went to either Corey’s camp or Marvin’s. The only person that showed up to support Jourdan was Chris. Again no one likes Chris. Jourdan rather have no one than Chris.

The photo-shoot is tense enough but having too much support or too little may hurt the final three. Corey’s friends kept interfering.

Marvin kept thinking he got this and so was ignoring the photographer’s instructions. He eventually listened but it could be too late. The same for Jourdan. It wasn’t until she could take breather during an argument behind camera that she was able to compose herself.

Back at home, all they need is some contact back home. They’ve missed their family. In their own way all they each want to do is make their loved ones proud by their actions. They all had to come from humble beginning whether it was ethnic, sexual, or a financial

background that has stood in their way yet they feel the other contestant won’t get how to model through adversity- it is a pretty excuse they have to say.

However even the Nylon spread doesn’t change much in feelings. Corey is the position where he wants to create a market for himself but is constantly told to be masculine. It’s easier for the other two. All they have to be is their selves while he’s told to change. It makes him feel like he has to wear a mask.

Later they all have to pretend to be a love triangle for a commercial. Not any love triangle either. He’s the abusive partner. Cory is in that position where he has to do more than the other two simply to prove he’s up to the challenge. Feeling like that makes him think he’s at a disadvantage. Marvin notices it and is glad. No one can knock you down like self-doubt.

In the final challenge of the day the cheering squad gets tested. If the contestant they’re cheering wins then they each get a 1,000 dollars. A lot of people are hard up for cash but mostly everyone stays with the person they picked. Except for Mike. He was team Cory and after hearing the new he became team Jourdan. In a way though Marvin figures she’s the poorer. No one really cares for her. They chose her when they think she can win it all or in Mike’s case – win some money.

The final challenge is the cat walk. Yet only two will walk the fashion show. The judges will eliminate a contestant before the runway. They’ll eliminate base on their social media scores and the Guess photo-shoot.

Unfortunately, results will only be revealed next week.