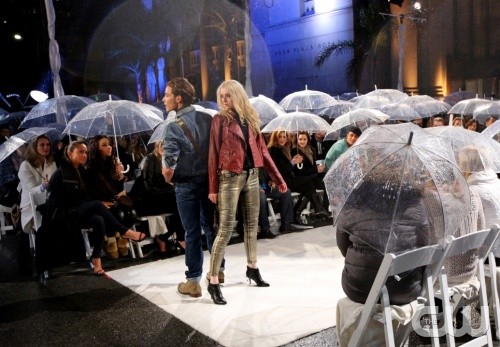 This season the show returns with new prizes and a new twist – men! The first-ever “Guys and Girls” edition will have eight men and eight women living under one roof to battle it out to earn the prestigious title of “America’s Next Top Model.” This cycle will explore the similarities and differences that male and female models face in the pursuit of their careers, bringing on experts and celebrities to mentor and challenge them each week. There will be more than a little opportunity for rivalry, flirtation and romance.

The model hopefuls will compete for a career-launching prize package that includes new prize suppliers Next Model Management and GUESS, as well as Nylon Magazine. The winner will receive prizes including: a $100,000 national ad campaign with GUESS, whose advertising campaigns have launched many modeling careers; a fashion feature in Nylon Magazine, as well as a modeling contract with Next Model Management.

On tonight’s show a vertical runway in the rain shakes up the model – The models have to compete in a vertical runway down the side of a building in the pouring rain. Then, the contestants are paired up and photographed in a mock-wedding photo shoot, which brings back painful memories for a recently divorced model. sic of the island as the winner of America’s Next Top Model: Cycle 19 is revealed.

RECAP: The models are about to star in an amazing fashion show for Guess that begins on the roof top. Renee is as scared as hell to do this. This is the first challenge, they will be scored from 1 to 10.

Chris is so excited to be there, he claims to be a southern rebel. Bianca is also excited and has been modeling forever, she doesn’t have a fear of heights. Mike dropped out of college, but now works at an ice cream truck – at least until he met Tyra. Marvin wants to win the competition, he has a crush on Bianca who has a crush on Mike. Don is terrified, he has PTSD and does not want to go down the building. Chlea is not afraid to go down the building. Rob Evans tells the models that Jessica Hart from Guess will be judging and they will win the Tyra key and the Tyra closet.

Casey is in charge of stunts and tells the models what to do. Nina is freaking out, it is raining outside and it’s cold, how the hell is she going to do this. Chris can’t believe that his is super real. Nina is dangling, but she did her best. Next is Kanani and Phil, they do ok. Jourdan is going along Chris, he looks like a zombie, she falls a lot and gets back up. Cory is terrified, but doing his best. Don and Chlea are next, he looks like another zombie and she just keeps yelping. Mike and Alexandra are next, they don’t do too well. Renee and Jeremy are up and he flops all over, but she does well. Marvin and Bianca are next, she is terrified, he does very well. Bianca flops all over the place. Jessica can’t believe that they all did this, Rob tells them two stood out and that was Bianca and Mike, they both gave up and didn’t sell what they were wearing. On the other hand, Marvin and Renee did well, but Renee is crowned the winner of this challenge.

Marvin is bugging everyone in the house, he has one condom left in the house and it expires in a week – I think he is joking. All the models meet Tyra and Johnny for a Vegas wedding shoot. Tyra is going to be setting their makeup looks. The guys are having a tough time controlling their hormones, same goes for the girls. Marvin is already warming up and getting cozy with Bianca. Meanwhile, Mike is so jealous and says that Marvin is going about it completely the wrong way.

Jiana is thrilled that Tyra is doing her makeup. Jeremy and Jourdan is first, the theme for their wedding is nudity and Jeremy is shy because he admits that he is a virgin.  Jourdan is panicking, she was married before and it was a horrible experience, but she pulls it through in the end.

Alexandra is shooting with Mike, it’s a shot gun wedding and she is posing pregnant. Kenani and Jiana are next, then Cory and Chlea and they are filled with tattoos. Don loves women, but he is posing with Chris H. Phil is posing with a cell phone and a TV. Nina, Marvin and Bianca are posing in the same shoot with three other extras, he has five wives. Chris S. and Renee are doing a Hip Hop mixed race wedding.

The shoot is all done, in the morning the models will meet the judges and nobody is safe. Social media will play a huge part in this competition, the reality is that people will be going home. Mike drinks and drinks wine until he is drunk and Marvin is ticked that he is hitting on Bianca.

Now they are going to add the judges scores, to the challenge scores and the social media scores. The highest score and best photo this week goes to Marvin, he out shined female models. Runner up for best photo, Don. Chis H. is next, then Jiana, Alexandra, Cory, Jeremy, Renee, Nina, Jourdan, Kanani, Chlea, Phil, Mike.

The person heading home with the lowest score is Bianca and Chris S. is going with her.

Next week the models will be working with one of the biggest models in Victoria Secret, you won’t want to miss it!