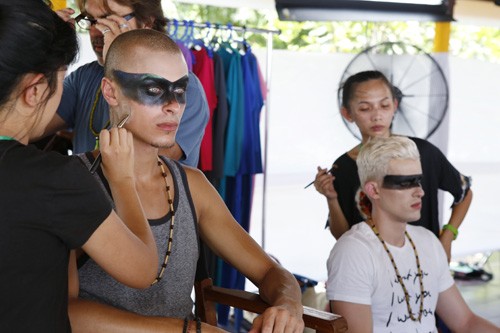 On episode 14 of AMERICA’S NEXT TOP MODEL called, “The Guy Who Becomes a Bat,” Chris is still there and his reaction to Nina is really bugging everyone. Chris doesn’t get it, he just doesn’t realize how much he has treated Nina like crap. Chris knows that Tyra believes in him and is just trying to concentrate on that because nobody likes him.

Time for the challenge, the models arrive at the beach to meet Rob Evans and Laura James, Cycle 19 winner. Jourdan is really excited and inspired to see Laura. Today’s challenge is a series of exercises, the person who does it the fastest is going to win.

Marvin gets the first head start, then Cory and last is Chris. Marvin wins and gets to enjoy a spa treatment with Renee and he couldn’t be happier.

Tyra Mail and the models find out about their next shoot, they think they are only going to get one chance.  Chris is in the same room with Marvin and Renee; he can’t stand the noises the two of them make in bed together.  Cory gets to talk to his boyfriend, Nathan and couldn’t be happier.

The models arrive at a temple, it’s actually a bat temple and they have to pose with them. Marvin is already freaking out, then they find out they will be posing upside down and Jez Smith will be taking their pictures.

Marvin feels like his confidence is at an all time high which he hopes will help him in the competition. Renee thinks Marvin did good, she is hoping they will both be on top.

Jourdan is next, she is really nervous but not because of the bats, she is nervous because they are coming towards the end. Jourdan does really well, Renee doesn’t – she passes out upside down.

Chris thinks Renee was just over dramatic and now it is his turn and he is in survival mode, he needs to bring it. Chris has a hard time, he just hangs there and does nothing. Cory is next and his problems are that he is too feminine.

Tyra Mail reminds the models that panel is in the morning and they are all nervous, two are going home tonight.

The models going home are Renee and Chris.

If you cannot wait until next week’s Finale Part 1 of 2: “The Finalists Shoot Their Guess Campaign,” we jave

CW Official Synopsis:  “The finale begins with past contestants returning to assist the final three models. The photo shoot is for Guess. Later, the eliminated models are put to the test when they are offered a cash prize.”