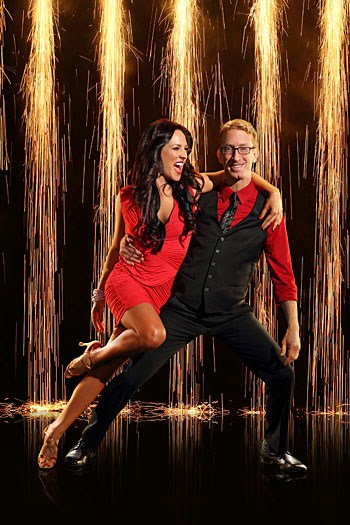 Andy Dick danced a Foxtrot on the premiere of Dancing with the Stars: 2013 performance show tonight.  DWTS is back with an all-new cast of fresh faces hitting the dance floor. This season features two new dance styles, contemporary and jazz; three new professional dance partners — Lindsay Arnold, Sharna Burgess & Gleb Savchenko; and notable theme shows.  If you missed the show, we recapped tonight’s show for you and if you want to see how all the couples did go HERE!

Andy Dick and professional dancer Sharna Burgess dancing a Foxtrot.  Andy said this about the first week of practice, “The first week was hell and I thought it would never let up. But then it suddenly got to be fun and now I’m smiling and laughing in rehearsals. I have the dance down, so now it’s about refining it so we can kick everybody’s ass.”

Judges’ Comments: Len: “The choreography was nice. This had the fluidity of RoboCop.”  Bruno: “It had a skittish charm and could’ve been smoother. It was comedic and he enjoyed it.”  Carrie Ann: “There is something charming about him and he touched her with the dance.”