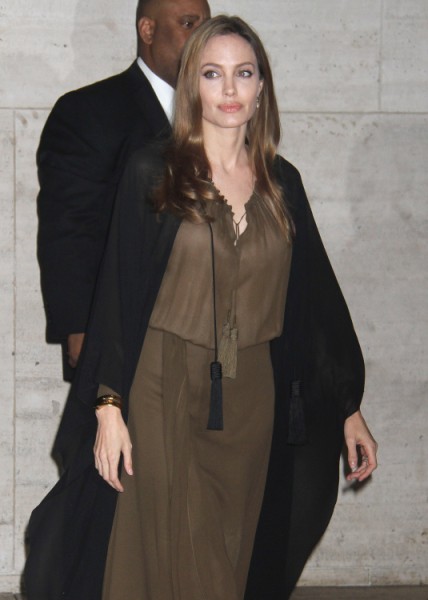 Angelina Jolie took an incredibly brave step forward today and revealed that over the past three months she’s undergone double mastectomy surgery. After learning that she had a 87% chance of getting breast cancer, Angelina Jolie took it upon herself to be proactive and start the preventative measures. You’ll remember that the star’s mom, Marcheline Bertrand, died at 56 from the disease.

In a New York Times piece, Angelina writes that after discovering she had the “faulty” gene, BRCA1, which sharply increases the risk of developing breast cancer and ovarian cancer, she decided to educate herself on what could be done to not only take more control over her health but to also put her kids’ anxieties at ease.

“My chances of developing breast cancer have dropped from 87 percent to under 5 percent. I can tell my children that they don’t need to fear they will lose me to breast cancer. It is reassuring that they see nothing that makes them uncomfortable. They can see my small scars and that’s it. Everything else is just Mommy, the same as she always was. And they know that I love them and will do anything to be with them as long as I can.”

She credits Brad Pitt’s support as one of the reasons she got through the three-month process and says the experience has brought them closer together.

What’s amazing is Angelina managed to make all this happen and still not let it interfere with traveling to the Republic of Congo on March 26 on humanitarian duties and attending the G8 summit in London on April 11 with William Hague. It just goes to show you that celebrities can be private if they need to be. The next time you hear Kim Kardashian bitching about never being able to do anything because of the paparazzi, remember this.

What do you think of the Angelina Jolie/double mastectomy announcement? By coming forward and sharing her story will she help others?