Angus T Jones of Two and a Half Men on Verge of Destroying his Career like Miley Cyrus? 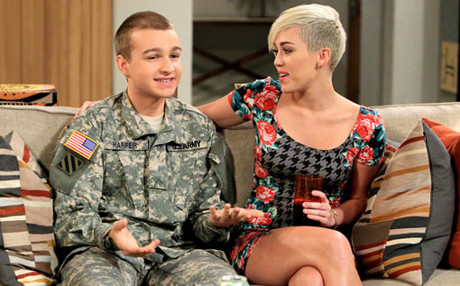 If Miley Cyrus‘ twerking, butt naked, VMAs grandstand wasn’t enough, we regret bringing you sad news about Angus T. Jones — the child star from Two And A Half Men. Well, since Charlie Sheen’s cracked out rant, and eventual dismissal from the show, everyone pretty much stopped watching. Jake Harper is an adult freak now, and sources reveal he’s headed for an emotional breakdown.

“Please stop watching Two And A Half Men,” Jones pleaded in an online video. Angus said the “deceptive enemy” will affect your Christianity. He slammed the show, and confessed he didn’t wish to be apart of it. He quickly, eerily, regretted his truths. “I apologize if my remarks reflect me showing indifference to and disrespect of my colleagues and a lack of appreciation of the extraordinary opportunity of which I have been blessed. I never intended that.”

Lord help him. “People are sick with worry about Angus. They’re afraid he’s going to have a total meltdown,” concerned sources tell Globe. The actor has lost more weight than Jennifer Hudson. He’s growing a strange beard now, and slowly becoming a recluse. His take on religion has helped get his Jake character downgraded.

Ashton Kutcher and Jon Cryer tried reaching out to no avail. His real parents probably just see him as an unlimited ATM machine. He started bringing his bible to the set, and preaching, and it scared the Sushi out the wealthy, money worshiping executives. “The producers were obviously very angry. They say they want him back, but there are currently no scripts that include a part for him.” That’s cold.

Expectedly, they’re bring on his rumored replacement, Amber Tamblyn. Tamblyn will be the daughter of Charlie Sheen’s late character. Do they put the child stars on drugs to cope with the fame, and long hours? Why is he so depressed? Is money and fame a bad thing? Just look at Amanda Bynes? Lindsay Lohan? Britney Spears? Miley Cyrus? What’s really going on with Angus T. Jones? Who’s next? Willow Smith?