Anne Hathaway is Head Over Heels for Kate Middleton! 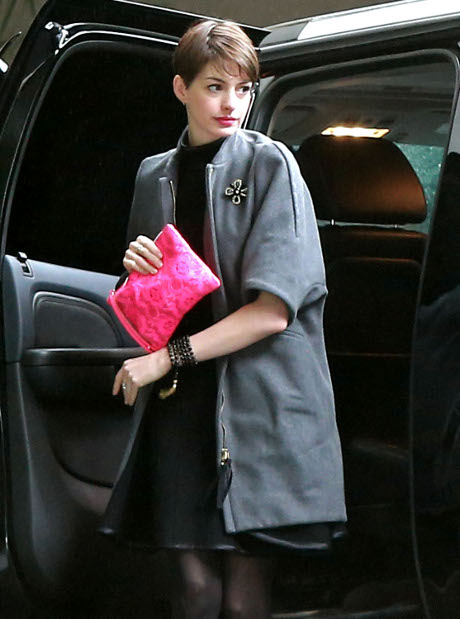 Everyone seems to be absolutely enchanted by Kate Middleton, even high-powered Hollywood actresses that seem to have it all. Most recently, Anne Hathaway went on the record to gush about the Duchess of Cambridge, proving that even movie stars can be big time fans of other people, just like you and I! Anne is no stranger to the role of being a princess and for the early part of her career many of her films had her cast as royalty. She recently spoke with Now Daily about her self proclaimed obsession with Kate,

“Right now I’m obsessed with Kate Middleton, obsessed! I’m completely enchanted by Kate and William and I loved the Royal Wedding. I was so cynical about the whole thing before it happened, but as soon as I saw her I was utterly charmed.  I thought, “Marrying your best friend is really the fairytale, never mind if he’s also a prince.”

Ironically, a lot of Anne’s fans would consider her life to be pretty charmed right now as well. The actress married fellow actor, Adam Schulman, back in September and baby rumors have picked up some momentum these past few weeks.  It could be that the actress and the duchess have quite a bit in common right now. Both are newlyweds and both could become first time mothers this year.

Did you think with all of the princess roles that Anne has played maybe she had an interest in royalty?  Either someone has portrayed princesses will absolutely love the real thing or be totally over the idea of royalty. Anne has always carried herself with purposeful class except for that unfortunate full frontal exposure last month–Anne Hathaway crotch shot story here) and I can see where Kate could easily become an icon of sorts for her to want to emulate. Do you see similarities between the actress and the Duchess? Tell us in the comments below! Why do you think Anne Hathaway loves Kate Middleton?