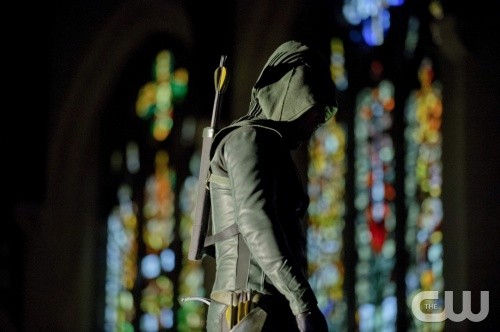 Tonight on the CW ARROW returns for its second season.  The show is based on characters appearing in comic books and graphic novels published by DC Comics. If you have never watched it After a violent shipwreck, billionaire playboy Oliver Queen was missing and presumed dead for five years before being discovered alive on a remote island in the Pacific. When he returns home to Starling City, his devoted mother Moira, much-beloved sister Thea, and best friend Tommy welcome him home, but they sense Oliver has been changed by his ordeal on the island. While Oliver hides the truth about the man he’s become, he desperately wants to make amends for the actions he took as the boy he was.

On tonight’s show called, “City Of Heroes,” Diggle and Felicity travel to Lian Yu in search of Oliver who left Starling City after The Undertaking. Convinced to return home, Oliver finds that things are in worse shape than he thought – Isabel Rochev is preparing a hostile takeover of Queen Consolidated, Thea refuses to visit Moira in jail, Roy is trying to fill the void left by the Arrow’s absence, and Laurel  is working with the District Attorney’s office to take down the vigilante. Meanwhile, flashbacks to the island show Slade, Shado and Oliver in a desperate situation.

RECAP:  A man is running through the forest, it turns out that the man is Oliver. An Asian man, John and a woman are in the plane and are about to arrive at an island. John gets his parachute on along with the women, they jump out the plane to head to the island. They begin to walk along the beach and enter the forest, they’re interrupted by the sound of something. The woman accidentally steps on a trap, John tells her not to move and deals with it. It’s a land mine, Oliver appears out of nowhere on a tree, and decides to help out. Oliver helps Felicity from the land mine and tells the two of them that they shouldn’t of came here. Oliver brings both John and Felicity back to his outpost in the jungle. Felicity is kind of requesting hospitality after their long journey, Oliver knows why they’re here to find him. John and Felicity want Oliver to come back, though he’s reluctant in doing so ever since Tommy died. Oliver’s mother is in prison, they want Oliver to come back because his family needs him. John understands why Oliver left the city, but he needs to go back home. Slade is training with his daughter and her boyfriend, they’re radar goes off and it’s no animal this time. Oliver is back in the city, he’s in the car with John and Felicity. Felicity shows a file to Oliver of a woman named Isabelle. It cuts to a woman and a man making out on a table, Oliver appears from behind his sister Thea and Roy saying that he’s back. Oliver finds out that his club is under management by his sister at the moment, they talk about their mother and how she went to prison. Thea is happy to see that Oliver is back in the city, Oliver thinks its nice to see that his sister looks like she’s got herself together. It cuts to a big part that’s taking place in a giant mansion of some sort, during the speech by the mayor he’s interrupted by a man who’s calling out. The mayor is then shot, a couple of guys who are up to no good start coming down the stairs firing. Laurel punches one of them in the face, but is caught off guard by another who appears from behind and has a pistol pointed to her head. These guys were well organized with this assassination.

The police arrive at the scene of the crime, Laurel is talking with her father about what has just happened at the Mayor’s speech. Oliver arrives and walks down the stairs, Laurel notices him and goes to speak with him. Oliver takes a walk with Laurel to catch up a bit and talk about the incident. Laurel admits to making a mistake with sleeping with Oliver at the time, she also mentions how it happened because Tommy thought they were better off together. Oliver knows how she feels, he retells the time he took her sister with him once and how it was betrayal to her and her father. They know that they can’t go back from what has already been done, Laurel walks away from Oliver. Oliver leaves the place and talks to John, John mentions how they need a vigilante in the city, but Oliver doesn’t seem to want to become The Green Arrow. The people who assassinated the mayor are pissed off that after they killed the mayor, they’re not on the news; seeing Oliver on the news makes them change their plans. That the Queen family needs to suffer in their place, the leader of this group of guys has some serious problems. Thea is at the club working with Roy, Thea mentions how Roy has never mentioned about his family; though they’re nothing great to talk about he says he’d like to see them again. Roy is trying to get Thea to go see her mother at prison, that not going isn’t hurting her mother, but Thea herself. Oliver arrives to the meeting along with John and Felicity, John is speaking about Isabella. Isabella is one hard ass of a woman, she wants more of a percentage of the profit Oliver makes. The men in black come into Oliver’s meeting and crashes the party. Oliver gets Isabelle out of the meeting, he then jumps out the glass window with Felicity to save her from them.

Oliver apologizes for what happened to Isabelle. Felicity says that Oliver could have easily taken those guys, and is upset that he didn’t do so. John agrees with Felicity, but Oliver says that he doesn’t want to be the hooded vigilante anymore. Oliver opens up to John and Felicity and tells them that the last conversation he had with Tommy, Tommy said that Oliver was a murderer. Oliver arrives at the prison and talks to his mother, Oliver brings up that she saved several live, but she counter it by mentioning that it also killed several people along with Tommy. Oliver’s mother wants to know about how the company is going, though she knows that it’s starting to get rough at the moment. Oliver brings up that Isabelle is trying to take over the company and run it instead, Oliver isn’t sure how he’s supposed to win. His mother brings up that it’s a family business, then mentions it’s not Thea that he needs help from. Roy asks if Thea has seen her mother, she says that she wont until Roy stops fighting crime at night. The men in black hoods appear at Oliver’s club, they try to hold hostages, but Roy acts quick and takes one of the men down and grabs a gun; he didn’t think things through properly and one of the hooded men grab Thea as a hostage and has a gun pointed at her head.

The hooded man starts walking off with Thea as a hostage, Roy couldn’t do anything to save her. Oliver arrives with the police at the club to investigate the crime, Oliver is not pleased to know that Thea was taken as hostage. Oliver goes down into the basement, you can see that he’s ready to going back as the hooded vigilante. Oliver, Felicity and John are prepared to find where Thea has gone, Oliver asks Felicity to find information on one of the men who were hooded. Oliver asks for his phone number, to check who he’s been in contact with. Oliver then wants to know an address, Felicity shows Oliver a custom made boy that looks extremely bad ass. Oliver thinks it’s perfect, Felicity agrees that once she signed onto helping him she did look past the body count of the people Oliver killed. Oliver mentions there’s no other way, now that they’ve taken his sister. Slade and Oliver go and try to save Shadow in a flashback of some sort, you can see Oliver lose it and kill someone brutally with a knife.

Thea is being held hostage in the church, the men are arguing with each other because of how young Thea is. Thea says that her mother didn’t kill anyone and says that she did it out of fear. Oliver appears as the hooded vigilante and begins to kick all of the men in black’s asses. One of them, the one who seems to have the most issues takes her as hostage once again. Oliver shoots the man with an arrow and he falls off the edge, Oliver though saves him by grabbing his hand and pulling him up. Oliver leaves the scene of the crime, Quentin sees him leaving and asks why everyone’s alive this time. Oliver responds that he’s trying something new.

Oliver is at the grave of his friend Tommy, Lauren appears from behind him. Lauren coincidentally came to visit Tommy’s grave also, Oliver knows why him and Lauren can’t be together. Oliver though admits that he wants Lauren to stay in his life. Thea visits the prison to see her mother, her mother wants to know how Thea is doing. Thea brings up that she almost died last night, she mentions that if she did die then she would have felt bad for not talking to her mother before it. Thea admits that she can’t hate her mother, no matter how hard she tries. Thea asks if she can hug her, they give each other a hug that’s some nice family bonding. Isabelle is being a bitch to Oliver, by saying she’ll be taking more of the percentage of the company. Oliver wants to know what can happen if he finds someone to invest in the company, Walter Steele arrives with Felicity. Oliver completely countered Isabelle with this move. Oliver is grateful for Walter showing up and being able to help. Oliver is relieved that he solved his problems, it then cuts to the past where Oliver is with Slade and Shado. Slade tells him they’re not alone, but that the question is where they’re coming from. Thea calls Roy and lets him know that she saw her mother, Roy sees some people hurting a girl. Roy plays the hero card and decides to show these punks whose boss, one of the men pull a knife, but out of nowhere w woman appears and completely kicks their asses. She runs away before Roy could question her about anything. Oliver and Felicity arrive in the secret base meeting up with John. Oliver knows that the city needs help, but not from the hooded vigilante; he says that the city needs a hero. Oliver doesn’t want to be known as the hood anymore, it’s not said, but it’s obvious that he wants to be known as the Green Arrow.