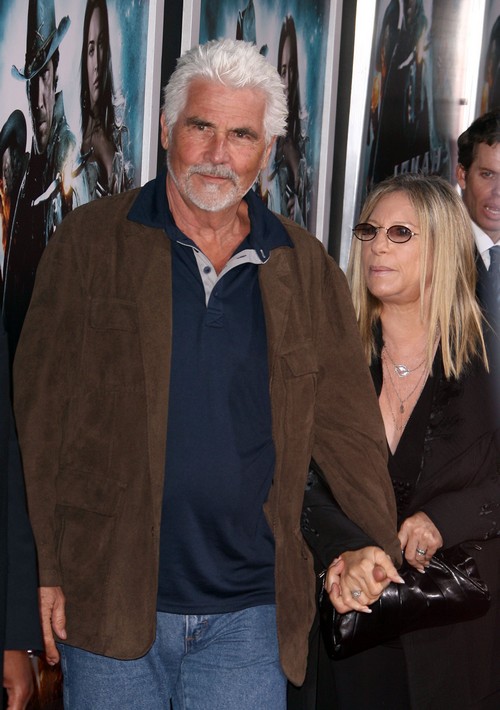 2013 seems to really be the year of divorce and separation for longtime Hollywood couples and it looks like we might be able to add Barbra Steisand and James Brolin to the growing list. It seems these two have been at odds for quite awhile and James is now taking more jobs in order to justify spending serious time apart. According to the Nov 11th print edition of National Enquirer James is tired of feeling  like a second rate citizen in his wife’s presence. He claims that is the worst case scenario when they are together and if he’s lucky then she simply ignores the 73-year old actor.

Apparently when Barbra isn’t focused on her music she is obsessed with her HIV positive son, Jason Gould. He is currently living in NYC but Barbra is trying in vain to convince her son to move to LA so that she can keep a better eye on his health. Barbra’s control-freak nature has caused a number of fights between her and James. Trying to control her son is just another bone of contention because the actor doesn’t understand why she can’t seem to allow her son to just live his own life to the best of his ability.

In Barbra’s mind, since she pays for Jason’s lifestyle then she should control where and who he lives with. The fights between Barbra and James over this issue have been so huge that he has actually packed up camping gear and fled! He thinks that this is not the way to run a marriage while his wife believes that absence makes the heart grow fonder. In her mind every time he walks out or leaves under the guise of work it’s a good thing! Unfortunately James does not agree and is throwing the word “divorce” around in conversations.

Will Barbra and James go their separate ways or is spending significant time apart good enough? Tell us your thoughts in the comments below!