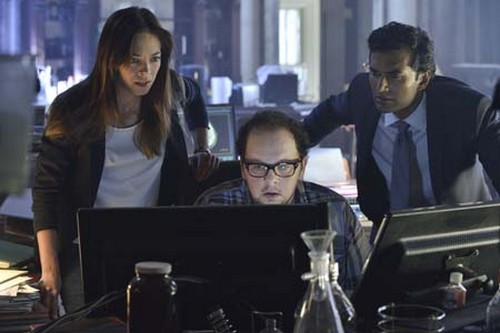 Tonight on the CW their hit fantasy drama BEAUTY AND THE BEAST airs with its second season premiere called, “Who Am I?”  If you have never watch the show Detective Catherine Chandler is a smart, no-nonsense homicide detective. Several years earlier, Catherine witnessed the murder of her mother at the hands of two gunmen. Catherine would have been killed too, but someone – or something – saved her.

No one has ever believed her, but she knows it wasn’t an animal that attacked the assassins…it was human. Years have passed, and Catherine is a strong, confident, capable police officer, working alongside her equally talented partner, Tess. While investigating a murder, Catherine discovers a clue that leads her to a handsome doctor named Vincent Keller, who was reportedly killed by enemy fire while serving in Afghanistan in 2002.

On tonight’s show three months after Vincent Keller (Jay Ryan) was abducted by Muirfield, Detective Catherine Chandler (Kristin Kreuk), is reunited with him – but not in the way she planned. He’s changed: his scar has disappeared, his memory has been wiped clean and he returns as a supercharged beast on a mysterious mission. Catherine needs to unravel the reasons behind Vincent’s change if she has any hopes of recovering their epic love, while also trying to solve the secrets that swirl around her own life. Also starring Nina Lisandrello, Austin Basis and Sendhil Ramamurthy. Stuart Gillard directed the episode written by Brad Kern.

Tonight’s episode looks like it is going to be great and you won’t want to miss it, so be sure to tune in for our live coverage of CW’s Beauty and The Beast at 9:00 PM EST! While you wait for our recap hit the comments and let us know how excited you about the new season, so far!  Also check out a sneak peek of tonight’s episode below!

RECAP: Catherine is sleeping while sitting on a chair, with her head lying on the kitchen table; she’s having several flashbacks of what happened before. Kristine tries to revive a man who was supposed to be dead, but now is alive. Catherine wakes up from the sudden flashbacks, she calls J.T. to check if he has any leads on Vincent. Catherine is persistent on getting information, but J.T. has nothing on Vincent at the moment. Catherine admits to loving Vincent and that’s why she wants to save him, J.T. is worried about Catherine and the whole situation that’s going on with Vincent. Then it cuts to Catherine in the police department talking to Nina; Nina understands how much Catherine loves Vincent, but brings up the conclusion of never finding Vincent. Catherine isn’t giving up on finding Vincent, Nina is worried because her boyfriend was once obsessed at one point and it ruined everything for him. Catherine admits that when she’s alone she wants to cry, but she doesn’t because she needs to stay strong in order to find Vincent. Gabe appears in front of Catherine and asks to speak to her in private, Catherine admits to saving Gabe only because she wanted him to help her find Vincent. Gabe tells Catherine that J.T. found Vincent and shows her a picture on his laptop.

Catherine and Gabe show up at J.T.’s place to see if who J.T. found is Vincent, J.T. admits that he isn’t sure if the person he found was Vincent; Catherine decides to let her emotions get to her and does something irrational and heads out to go save Vincent, or who ever this man is. Heather calls Catherine, but Catherine is busy at the moment driving fast to save Vincent; but Heather needs Catherine to be at a very important speech. Heather mentions that her and Catherine need to talk and that the topic will be about their father. Some Yakuza looking person steps out of a car and walks up to Vincent, wanting Vincent to look him in the face. Catherine shows up and somehow takes out a few guards who were armed, which is pretty unbelievable. Vincent wants to clearly kill the Yakuza guy because he’s the one who turned Vincent into a beast to begin with; Yakuza explains why he decided to turn Vincent in to a beast and mentions how he’s a valuable weapon. Vincent is acting pretty cocky and doesn’t look pleased to be hand cuffed to a chair. Vincent goes beast mode and destroys the hand cuffs as if they were only plastic to begin with, the guards who were with Yakuza go down one by one. Vincent starts walking towards Yakuza, but Catherine gets in the way and ends up messing him up. Vincent had a chance to kill Yakuza, but Catherine ruined everything and that what thinking irrational gets you. Now Vincent is trying to attack Catherine, but J.T. and Gabe save the day with a tranquilizer of some sort. Vincent turns back into a human, Catherine starts getting sentimental and all that bull shit. Vincent asks Catherine who she is (plot twist) and she seems pretty upset about it.

Gabe wants to stay in the room with Catherine, in case when Vincent gets violent once he wakes up; Catherine has chip on her shoulder and declines. J.T. admits Gabe sucks, but it would be better to have him because they’d be safer. Vincent wakes up and is confused of where he is, Vincent looks at Catherine, but doesn’t remember who she is at all. Catherine wants to know who J.T. is and Vincent pulls a fast one and says “your husband?” J.T. brings out a picture of both Vincent and him in the past, Vincent still looks pretty damn confused. Catherine is late to Heather’s speach at their father’s tribute, J.T. has got Vincent under control and tells Catherine to leave. J.T. doesn’t feel entirely safe alone with Vincent. Yakuza feels like he was set up the entire time, Reynolds talks to Yakuza like he’s the boss and that Yakuza must listen to him. Reynolds is obviously affiliated with the police, Yakuza threatens Reynolds and the police. Reynolds has no idea of what’s going on, though it’s clear that Yakuza was set up. Reynolds mentions to another man who a female cop got in the way of Vincent at the time he was supposed to kill Yakuza. Catherine arrives at her father’s tribute, Heather is happy to see her. Catherine wants to know what Heather wanted to talk about, but Heather wants to save it for later, for at the moment it’s not a good time to talk about it. Catherine walks outside and Bob Reynolds comes out of no where to say that he’s sorry for her lost. Catherine talks to Bob about her father and the current case she’s working on. Bob mentions how Catherine’s father would speak about her a lot. Bob knows where Vincent is. J.T. is still dealing with Vincent back at their place, they’re looking around the place. Vincent asks about Catherine, if they were both close and J.T. mentions that they are very close in fact. J.T. asks Vincent if he remembers anything at all, Vincent is bothered by all the questions and threatens J.T. Vincent says he has to go, because he’s late for something; Vincent tells J.T. to tell Catherine that he couldn’t stop him. J.T. pulls out a weapon and tells Vincent that he doesn’t want to shoot him again. Vincent gives a sinister smile and J.T. is confused. At the tribute for Catherine’s father she receives a call from J.T. and he tells her how Vincent left. J.T. looks injured in some way, Catherine tells her sister Heather that she’s sorry and leaves her father’s tribute.

Catherine is surprised that Vincent tranquilized J.T., J.T. believes that Vincent’s mind is loss and that he’s not the same anymore; that he might never remember them at all again. Catherine finds an iage of Mr. Yakuza and wonders if Yakuza will be a lead to find out how Vincent lost his memory. Nina arrives in Gabe’s office, Gabe closes his laptop due to reflexes. Gabe asks if Nina has ever seen Yakuza, she says she hasn’t and Gabe mentions that’s the problem he doesn’t know who he is and nobody else does either. Gabe finds a match to Yakuza’s identity, it turns out that Yakuza’s name is Lee Zhao; they find out why Vincent is after Yakuza. Vincent is preparing himself to go and hunt down Yakuza, Vincent calls Condor and asks him who Catherine is. Vincent is starting to get soft during the job, and Condor tells him that clearly. Vincent is back on the hunt and ready to kick Yakuza’s ass.

Vincent is having flash backs of his past with Yakuza, Vincent is at the right location to find Yakuza. Catherine obviously followed him, J.T. tells her that she shouldn’t get in Vincent’s way and she knows that she shouldn’t and won’t. J.T. found out that Vincent’s hemoglobins can change, meaning that he can easily track another person easily. Vincent is now the ultimate hunter and Yakuza should be fearing for his life. Vincent stops while walking and looks behind him, Catherine goes into hiding to make sure he doesn’t spot her. Luckily Catherine wasn’t spotted and Vincent continues walking, now it looks like Catherine has been tailing Vincent for quite awhile; they finally arrive at a hotel. Vincent is shown kicking everyone’s ass, Yakuza is scared and fears that this may be the end of him. Vincent is destroying everything whether it’s a person or an inanimate object. Catherine is calling out for Vincent looking for him and once again getting in his way, Yakuza is still alive with a gas mask behind him is Vincent. Vincent hits Yakuza to the floor, Catherine keeps calling for Vincent getting in his way which she said she wouldn’t. Yakuza is worried at this point, Catherine is about to die due to the lack of oxygen; Vincent appears and sees Catherine’s life instead of killing Yakuza. Yakuza makes it out scott free, Catherine once again gets in Vincent’s way and ruins everything for him. Catherine starts getting sentimental once again, and mentions how they’re meant to be.

Catherine’s father is not happy to see that his daughter keeps on getting in the way, Catherine and Vincent are alone together in an apartment room. Catherine tends to Vincent’s wounds, Vincent apologizes for not being able to remembering her. Catherine isn’t worried, but she’s happy that they’ll get to fall in love with each other again; Vincent doesn’t seem to believe in that as much as she does. Catherine wants to confirm that he believes in them also, though it seems that Vincent has skeletons in his closet that he hasn’t brought up yet. Catherine is getting emotional about the whole situation wondering why they’re after Vincent, Vincent clearly doesn’t know either and says he can’t answer her questions. Catherine doesn’t want Vincent to go, Vincent goes in and kisses Catherine though he has no proper memories of her. Catherine pulls away after getting what she wanted, she reads a text from her sister Heather and begins to cry. Vincent looks pretty confused and hugs Catherine, tonight I’ve learned what I’ve known for a long time women are confusing. Catherine wakes up in bed due to her phone ringing, her friend is asking where Vincent is. Catherine arrives really damn fast at the crime scene, the victim of a murder was found mauled to death and surprise it’s Mr. Yakua. It’s clear that Vincent went and got revenge, way to go man.