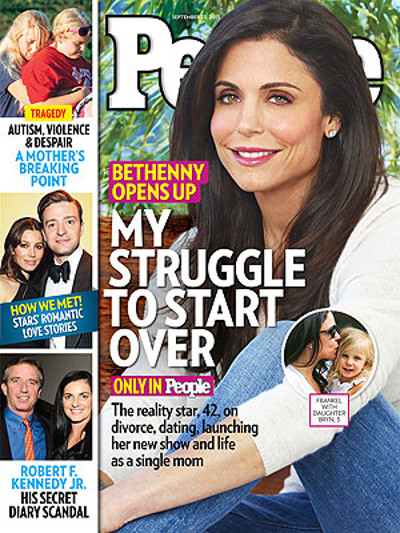 Late last year, Bethenny Frankel announced to the world that she and her husband, Jason Hoppy, were splitting. At the time, she expressed hope that they could dissolve things in a decent fashion. All of that niceness went out the window pretty darn fast and Frankel has instead found herself locked in an ugly divorce battle. She and Hoppy have fought over everything from the home that they still share to money and of course custody of their three-year old daughter, Bryn.

According to the Sept. 23rd print edition of People magazine, Frankel is still trying to figure out how to carry on as a single mother while her ex nips at her heels for cash and resources. Her talk show hits the airwaves this month and Frankel says that juggling a new work challenge with being mom is more than enough to fill her life. She also admits that dating and men aren’t even a thought. Her mess with Hoppy has caused her to be completely unavailable emotionally and for now Frankel thinks that is just fine.

No doubt the custody battle over Bryn has done a real number on her, as Frankel and Hoppy are both taking aim at custody of the child. He clearly has more time to care for the young girl and he has used Frankel’s strong work ethic against her in painting the picture of a mother that rarely spends quality time with her child. I think that is greatly exaggerated though because we often see Frankel photographed out and about with Bryn, sharing very normal mother/daughter time.

Will Frankel be able to hang onto custody while continuing to grow her brand? Tell us your thoughts in the comments below!