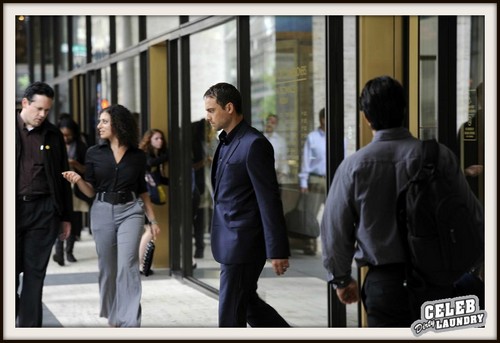 Tonight on ABC their sensual and gripping new drama BETRAYAL continues with a new episode.  On tonight’s show in the aftermath of their passionate affair, Sara and Jack struggle with what their future holds.

If you have never watched the show before a chance meeting between Sara, a professional photographer, and Jack, a top attorney, leads to an instant and undeniable attraction. Sara’s husband, Drew, is a successful prosecutor with political aspirations, and the couple have a seven-year-old, Oliver. Unbeknownst to Sara, Jack is in-house counsel to a powerful but somewhat shady entrepreneur, Thatcher, and is married to Thatcher’s daughter, Elaine. Elaine, secure in her relationship with Jack, is a smart, determined woman attempting to make her Chicago café a success on her own terms, as well as be a good mother to the couples’ 16-year-old twins, Valerie  and Victor. However Sara and Jack both realize something is missing in their marriages, and fight against the realization that they’ve met their soul mates in one another.

On tonight’s show still reeling from the discovery of who Jack really is, Sara decides to recommit herself to her marriage. Meanwhile, Jack comes face to face with Sara’s husband, Drew, in the murder investigation that has shaken the Karsten family to its core.

Tonight’s episode is going to be another great episode, which you won’t want to miss. So be sure to tune in for our live coverage of ABC’s Betrayal Season 1 episode 2 — tonight at 10PM EST! While you wait for our recap, hit the comments and let us know how excited you are about the return of Betrayal tonight.  Check out the sneak peek video below!

The ramifications of their fling are still being hardly felt. Sara is doing her best to put all of it behind her by concentration on her family while Jack is throwing himself into his work. In a case for him he’s stuck following around T.J. The guy mixed his pills with alcohol and created a scene at the club. Not the kind of thing they need right now what with the cops needing to ask some questions.

They got Brandy to take him away but can she truly be trusted? TJ has a crush in her and he could say anything to her. Right now she’s a committed employee and tomorrow she could be a blackmailer. Maybe if Jack’s head was clear he would have put a stop to that. Instead he’s getting love-struck over texts Sara had sent him.

Luckily that in no way affect his husbandly duties with Elaine. For Sara however she’s searching for information on him using private browsing so her husband won’t find out. She also wasted a perfectly goo underwear by throwing it away. Only when people begin to act suspicious does anyone suspect them. Doesn’t she know that. Suddenly becoming more interested in in being the perfect wife and mother can set tongues wagging.

Leave it to her to be more attentive by stopping by her husband’s office to drop off a fresh shirt. Just as he was in a meeting with Jack. Jack had called the meeting realizing that TJ would crack under pressure so he thought he drop a few innuendoes and be fine. What he hadn’t expected was to find he was dealing with his lover’s husband. It throws him off his game and he can’t stay to carry out what he’s supposed to.

What’s makes the particular situation uncomfortable was that he texted her not too long ago to meet up again. She didn’t answer him back but odds are he though she wold. Not anymore though.

He goes to Unclue Lou’s wake, organized by his wife and kids, in order to strategize how best to hide TJ from the cops with Thatcher when he gets the call. TJ is at the police station. The cops brought him in when they spied him trying to re-enter his house. Yet TJ appears to have his “story” together. Earlier back at Brandy’s, Brandy had helped him how to lie. So yeah, apparently she was trustworthy. Because someone helped coach TJ to fool the cops convincingly.

At the wake, Thatcher is wrapping up loose ends with Lou’s widow. He makes sure she’ll come up with seeing someone else that night. If she doesn’t then everything she has will be taken away by Thatcher. It doesn’t matter what TJ may or may not have done. The same goes to his daughter, Elaine. All that matters is that they protect TJ.

Sara went to work hoping to forget Jack and finds out that he followed her there. He wanted to explain that the never targeted her. It really was a big coincidence. Not that he’ll let that stop him. He really acres for her and wants to keep going with their relationship. As he’s busy making nice with his mistress his case is getting out of hand.

Sara is rethinking her relationships. She thought what she had wit Jack would be a fing when it suddenly dawns on her how it’s becoming an affair. He says he’ll wait for on the bridge and if she shows up then they can continue as if they never found out the truth.

Jack had plans to wait for her but those plans are about to be cancelled. Not only because she’s not showing up. TJ got arrested. It looks like Connie gave him to the police when Drew stopped by.

Drew had went to the widow, Connie to tell her how her husband had plans with the feds. She didn’t know that part and neither does Jack and the family. Knowing her husband planned to become a rat made her change her mind about protecting his killers.