Beyonce Intentionally Wears Fur to Vegan Restaurant – Is She Rebelling Against Jay-Z? 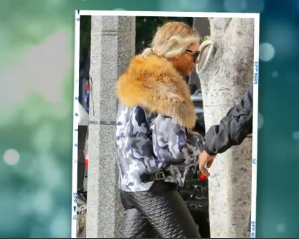 When will they get it. There’s nothing more embarrassing than when a singer tries to move into acting. Beyonce should have stuck to music rather than attempt to pull off the nonchalant act. It’s just not one of her pre-set emotions she could easily pull out of her bag of tricks. Instead of cool and collected; she wore a shame face (head down and gigantic sunglasses to help) as she committed fashion suicide.

Although Beyonce has had her fair share of fashion blunders (we remember Destiny’s child jean outfits) she’s never made quite a mistake like this one – she wore fur to a vegan restaurant. Yeah, see when people become vegans they generally would prefer not to see evidence of dead animals being worn in their presence. So shame was the correct emotion for her. Want someone who wears the silliest thing while pretending to be on trend then ask Kim Kardashian. We expected better from Queen Bee!

Why did she wear this? Much less who would search their closet for real chinchilla just to dine out at a cafe. If it was a late night dinner at a non-vegan restaurant the fur would still be too overdressed.

That is the main question because last anyone heard her family had taken a sabbatical from consuming meat, eggs, and whole bunch of other great carbs. Then it hit me. That light-bulb moment when everyone realizes it was actually Jay-Z that came out and announced his family will be trying veganism for basically the whole Holiday season. The one where people eat their fill and don’t worry about it.

I have lots of pie (pumpkin, apple, or blueberry) during the Holiday season. Do you know who I’m betting misses pie? Ding Ding Beyonce!  His wife, Beyonce, has yet to make a statement or endorsement for the “healthier” lifestyle her husband has imposed on her. The closest anyone has gotten to this native Texan’s opinion on this matter was snapping a photo of her wearing that fur coat.

This woman has people looking out for her. It’s entourage+ PR which by the way should have = no freaking fur coat. Beyonce went out of her way to wear fur. She did this with full intent and did she while out with her husband. Take this warning as Jay-Z. Give the woman bake her baked goods or else she’ll be wearing you next!