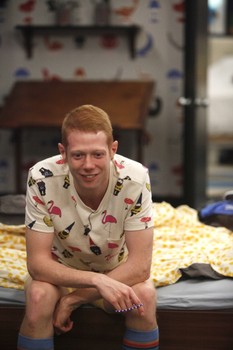 Big Brother 15 is gearing up to choose a winner this season. The final HoH will get to pick who they bring with them into the final two for the big $500,000 prize.  As we reported here on CDL GinaMarie Zimmerman took out clumsy Spencer Clawson and Andy Herren the snake to win round 1 of the final HoH competition.

This left Andy and Spencer to battle it out for the right to contest HoH against GinaMarie in round 3 on Big Brother’s finale event on Wednesday.  The winner of that round will be crowned final HoH.  Andy came out victorious in what both Andy and Spencer described as the hardest fought competition of the season.  Andy is on top of the world and Spencer is down in the dumps.

Speculation is that the winner of Final HoH, whether Andy or Ginamarie, will want to take Spencer to the end with them.  Perhaps he needn’t be all that glum after all.  Which contestant do you see winning this season – and which one would like to see win?