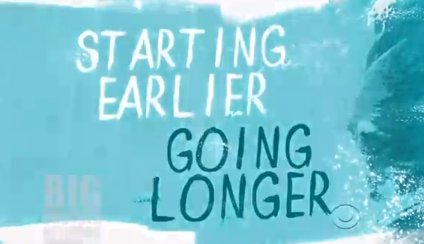 Big Brother is my all time fave reality show, and I can’t wait for it’s return later this June. Recently, the network has released some fantastic news: They will be starting the show earlier than previous years and — wait for it — will be going longer into the summer than usual. Yep, that means we’re getting more, more, more Big Brother than we’re used to. How bad can that be, folks? Not bad at all — not in my book anyway.

The newest Big Bro promotional commercial aired recently, promising us a 100 days of the show. While that might be an exaggeration, never know. Online Big Brother, a great source for all things Big Bro, got all analytical on us and helped run some numbers — which is not something I particularly enjoy doing.

In this commercial CBS eludes to the fact that Big Brother 15 could be 100 days long, which would be a full 25 days longer than the usual 75 day season. They state that this season is Starting Earlier and Going Longer which means Big Brother 15 could most likely have the finale near the end of September. Calculating out the days if season 15 actually is going to be 100 days long, which I HIGHLY doubt, would have the premiere as we know on June 26th and the finale on October 4th. As October 4th is a Friday and the finale’s are always on the eviction night being Wednesday this season, the finale will likely be some where between September 18th and October 2nd.

Sounds like we should take some of the things said in these promo trailers with a grain of salt; however, here’s to hoping for a long, long run of episodes to keep us entertained until the networks lay out their new fall lineups!

In terms of casting news, the producers of the show continues to be quite coy, as they don’t like being boxed in with super firm game plans. One thing we can almost be sure about though, judging from rumors circulating cyberspace, is that there will be no Big Bro alumni returning to the house. Get ready for ALL NEW house guests. I do appreciate new players. But I also like to see old ones return. They know how to play the game — usually fairly well — and they aren’t afraid to get dirty, tell lies, and throw some scandalosity into the mix.

What do you think about Big Brother 2013? Are you looking forward to it? Let us know in the comments section below! And stay tuned for more Big Brother 15 sneak peeks!